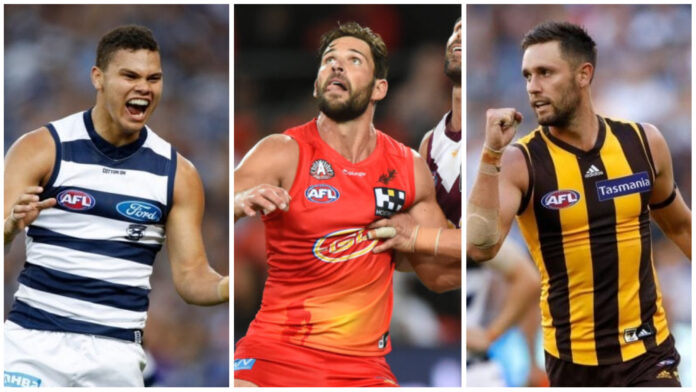 With three weeks left in the 2022 AFL season, and players beginning to call time on their careers, we look toward 10 players that are yet to secure their services for next season.

Whether they be in the twilight of their careers or likely to gain external interest in the off-season, these 10 players are seemingly no certainty to remain at their respective clubs given their current contract status at the start of August.

Some will be putting off contract talks for the remaining rounds of the season, while others will face a nervous wait as their club considers its list plan for the years ahead.

Here we put the magnifying glass over 10 players yet to re-sign for 2023, not necessarily looking at the biggest names off-contract, but those that have flown under the radar in having their futures yet to be determined.

VIEW: EVERY PLAYER WITHOUT A CONTRACT FOR 2023

The veteran forward surprised many in his move to the Suns at the end of last year, having concluded his time at Carlton after not being offered a new deal for 2022.

Gold Coast decided to roll the dice on Casboult for this season, a budget move that is now paying dividends in the absence of injured young forward Ben King.

While Casboult won't be part of the Suns' plans for the long haul, he has played an integral role in aiding the development of fellow forward Mabior Chol, who is enjoying a career-best campaign in his first season back in Queensland.

The pair have combined for 77 goals, with Casboult's tally of 34 majors equalling his career-best at Carlton - a feat reach once in a decade at Princes Park.

Bit with King to return and slot into the first-string forward role to push both Chol and Casboult down the pecking order, will the Suns look to extend the 32-year-old's contract beyond this year?

Casboult is yet to re-sign at Carrara, but his form and ability to support his fellow forwards is sure to see the ex-Blue add another year to his career.