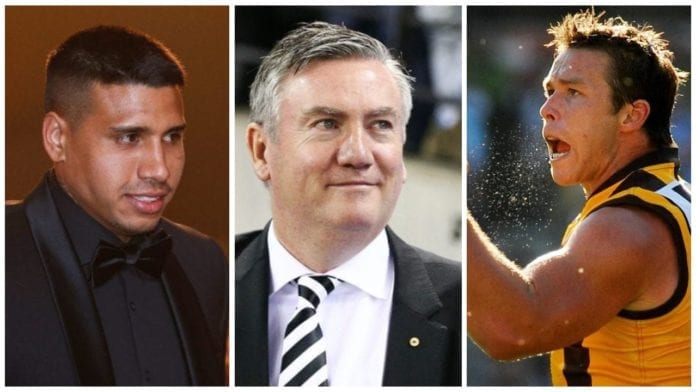 Not many would have expected the headlines that have come out of the AFL this year. And with such an uncertain year still ahead of us, you’d be a fool to rule out almost anything becoming front-page news.

But let’s not lose our heads. Yes, anything possible, but surely not these 10 headlines. Put your house on it, and your parents’ house, if you have to.

Although, maybe take out house insurance, just to be sure.

We’ve had a little fun with this one… here are the 10 AFL headlines that will definitely (probably) not happen in 2020….


Eagles ball magnet Tim Kelly has shocked his teammates and Eagles fans after admitting in an interview he misses Geelong’s nightlife and is keen on a return to the Cattery sooner rather than later.

“Don’t knock The Sphinx until you’ve tried it,” Kelly said.

‘Ahead of the curve’: AFL praised by world leaders for implementing the social distancing measure known as ‘6-6-6’ as early as last year

World leaders have fallen over themselves to praise the AFL for leading the response to the global pandemic. German chancellor Angela Merkel was one leader who said the AFL’s revolutionary “6-6-6” rule had paved the way for similar social distancing measures to be enacted.

Tom Mitchell starred in the Hawks’ victory over long-time rivals Geelong, becoming the first player to gather 50 disposals without recording a single kick.

“The leg felt a bit sore after last week, so I thought I’d play it safe,” Mitchell explained post-game.

But not all fans were impressed. Some criticised the Hawks’ junk-time handball drill in the defensive goal-square that practically guaranteed Mitchell would reach the milestone.

“I never did. I never backflipped. I know you’re after a story, but that’s the truth of it,” Koch said on Fox Footy.

Vic Bias? McGuire says if interstate clubs “don’t like the VFL”, they should leave

Eddie McGuire has once again started a media firestorm after his comments on radio this morning. Responding to Kane Cornes calling the media biased towards Victorian clubs, McGuire bit back.

“If you lot – if you don’t like the VFL, you should leave,” McGuire said.

“What did I say?” McGuire said.

‘Beyond unfair’: Richmond unveil 6’9″, 113-kilogram US import capable of playing both small and power forward

Rival fans have pleaded for the AFL to step in after Richmond’s newest import, Cleveland-native LeBron James, took sixteen marks in their win over Collingwood last night. James arrived in the country last week after he had earlier expressed on Instagram his desperation to play competitive sport. His home country, the US, remains locked-down for the foreseeable future.

The only saving grace for the Pies was that the impressive athlete kicked 2.13 from 22 set-shots.

A visibly sleep-deprived Kane Cornes has ranked his favourite lists of all time on television this morning. Coming in at number one on Cornes’ list was his recent ranking of the AFL club songs.

When the line was opened to the public, Cornes had to defend himself when a caller accused him of finally running out of things to rank.

Ross Lyon has been derided by social media critics after last night’s episode of Footy Classified. Many thought he came across as too defensive and lacking a Plan B when his fellow panellists began to criticise him.

“I just can’t see him ever winning a Media Personality of the Year with this current style,” one viewer tweeted.

Bruce McAvaney charged with breaking social distancing laws during pre-match interview: ‘I thought it was 1.5 centimetres, not metres’, Bruce explains

Legendary broadcaster Bruce McAvaney has been fined for failing to adhere to the government’s social distancing measures. McAvaney’s famously intimate interviewing method was once again on display when he spoke with Pies coach Nathan Buckley before Friday night’s game. Later, it emerged McAvaney had been spoken to by police and issued a $1600 fine.

‘Three minutes of madness’: Stuart Dew takes to the field and turns the Grand Final for the Suns

No one gave the Suns a chance against the Tigers, whose bid for three premierships in four years was foiled by the well-built forward’s cameo, which saw him kick 3 goals and set up another.