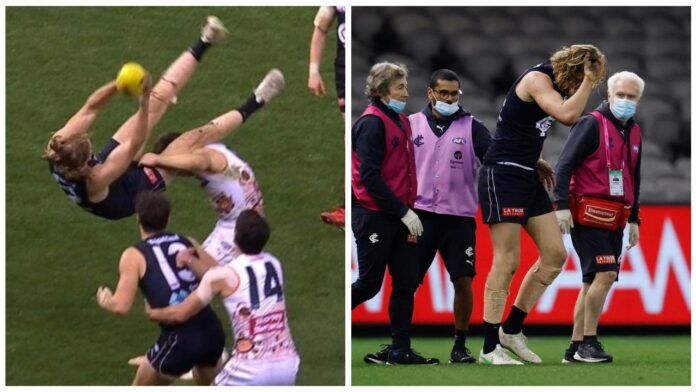 "Horrible scenes. You hate seeing that."

Tom De Koning was stretchered from the field after a nasty landing from a high-flying mark attempt during #AFLBluesGiants.

The incident came with under two minutes to go in the game as the exciting ruckman flew high to clunk a beautiful mark before hitting the Marvel Stadium ground hard and kneeing himself in the head.

The Carlton medical staff had originally called for the stretcher before De Koning opted to leave the ground on his own. However, as he got up to run off he quickly fell down again.

The worrying signs were enough for the Blues staff to make sure De Koning left the ground on the stretcher.

Carlton coach David Teague said the young high-flyer was ok but had suffered a concussion.

"I haven't been briefed totally but I did get a message that he was ok. From what I saw he had concussion.

"I think he was trying to get up and get going. He'll be ok, it was a pretty impressive mark, the way he launched at it and put his body on the line."