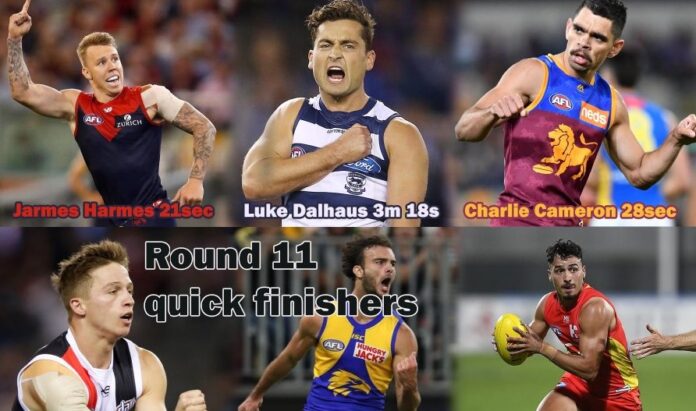 We’re back for Round 11 of Zero Hanger’s weekly ‘five useless stats’ series.

Every week Aaron Delaporte from Useless AFL Stats will take a look at the most useless statistics from the weekend, the ones you never knew you needed to know until now.

Courtesy of some very close matches Round 11 again provided us with another five weird yet captivating and ultimately Useless Stats.

Round 11 produced the quickest start for goals in an AFL round since the 18-team competition was introduced, beginning with James Harmes' opener on Friday night which took just 21 seconds to set the Dees on their way against the Bulldogs.

The longest wait for any of the nine games was just 3 minutes 18 seconds when Luke Dahlhaus kicked a major for Geelong in the win over Collingwood.

James Harmes got us going within the first 20 seconds. #AFLDogsDeespic.twitter.com/Km1bKfeXQm

The combined nine-game total was just 16 mins 24 secs at an average of 1min 49.3 seconds per game.

In contrasting fashion, West Coast took 29mins 35 seconds to kick the opening goal against Hawthorn a few weeks ago which is the slowest in AFL history.