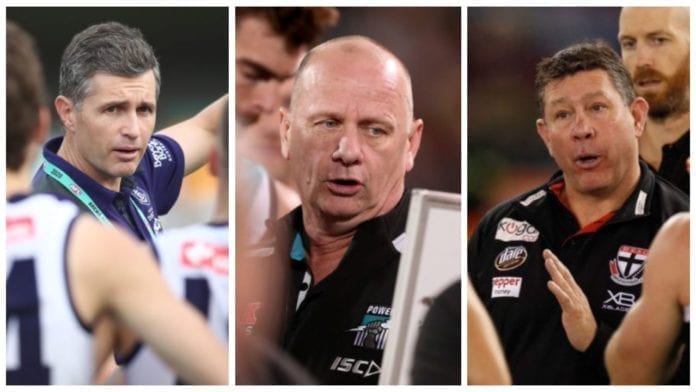 In a season unlike any other, there has never been a greater need for leadership.

With financially maimed clubs having to herd the entirety of their playing groups north, there had never been a greater need for leadership.

Now in these hubs, said playing groups have been asked to adhere to a collection of stringent regulations. With many of these players of an age where messing up is second nature, again, there has never been a greater need for leadership.

With reduced quarters, strings of short turn arounds and the holding the ball rule seemingly non-existent, you guessed it, there has never been a greater need for leadership.

At the end of each season, the coaches association votes are tallied, and one of the eighteen leaders is voted as the AFLCA Coach of the year by his peers.

Of the 18 names with skin in the game, we’ve narrowed the field to the five realistic possibilities.

“But his team didn’t even make finals!” I hear you cry.

Sure, it may seem a tad premature to be adding Justin Longmuir’s name to this list, but every field needs a roughie.

Garry thinks Justin Longmuir should be in the conversation for coach of the year 🏆 pic.twitter.com/oBHsGJchFR

Fremantle’s 2020 rise has come off the back of the implementation of a new defensive structure. This new look defense has conceded on average 53.1 points per game as opposed to 78.1 last season.

Sure, this dip in conceding scores may have come in a season of shortened quarters, but the Dockers have also been able to convert at the other end of the ground and win games.

Last season the Dockers finished in thirteenth with nine wins and concluded the 2020 home and away season in twelfth with seven. This isn't a climb of Everest proportions, but ‘J-Lo’ and his troops have provided some required joie de vivre for the oft neglected purple portion of Perth this season.

The majority of Fremantle’s seven wins have come against opponents they have been tipped to topple, but this must be seen as a sign of maturity. It must be noted that this coming of age has happened despite losing the experience of Aaron Sandilands, Hayden Ballantyne and Brad Hill.

In 2020, Longmuir has nurtured young talent such as Darcy, Cerra, Serong, Brayshaw and Duman whilst also providing a system to allow Acres, Aish, Ryan and especially Taberner to flourish. All of these names stand to yield bumper crops in future seasons.

2020 has been a season where the term ‘home game’ has lost all effect, unless of course you call the Sunshine state home. But with only seven games in Perth this season, Longmuir’s lads should provide stiff opposition for teams crossing the Nullarbor in 2021 and beyond.

With Caleb Serong’s rising star victory all but sewn up, it would be remiss of us to omit his mentor from this list.

This season, ‘J-Lo’ has sold not just a playing list, but also a fanbase a future. Despite missing out on an invitation to the season’s after party, rest assured Freo fans, with Longmuir at the helm, you won’t be waiting for much longer.

It’s not often you are likely to see a previously sacked coach make a list like this. However, with Brett Ratten steering the perennial failing Saints to a drought breaking finals berth, he has more than earned the nod.

Finishing 2019 in fourteenth position with a 9-13 record and a dismal percentage of 83.9, Ratten has reinvented the Saints in 2020. With an obvious facelift rivalling that of Jocelyn Wildenstein, it could be argued that St. Kilda’s strongest addition wasn’t any of the much-heralded quintet of recruits, but instead Ratten.

Oh what a feeling!

The moment Brett Ratten was announced as our next Senior Coach 😁 pic.twitter.com/CT0BpXawwt

Since walking through the doors, ‘Ratts’ has galvanized a disillusioned playing group after the awful Alan Richardson era. The Saints 10-7 record in the home and away season with a healthy percentage of 116.2 is all the progressive evidence needed to silence doubters.

With a team that was designed to win games under the roof at Docklands, the young Saints, under the eye of the former Carlton premiership player, have managed to win games against three sides in the eight. If the Saints are able to make waves in the finals this season, expect Ratten’s odds to shorten with the bookies.

Despite a winning percentage of 51.29% in his time at Carlton, Ratten was shown the door by a delusional Blues board in 2012. With success at Hawthorn as an assistant to Alistair Clarkson, it was only a matter of time before another shot at a senior role emerged.

St. Kilda fans have grown used to a revolving door attached to their coaches box and cobwebs in the trophy cabinet. With Ratten now at the helm, they have tangible results to suggest that these trends may soon be halted.

"‘We can learn the lessons and we can look forward to it."

Ratten's appeal to embrace the challenge.

Having already ‘been there, done that and got the t-shirt’, it should come as no surprise to see Damian Hardwick’s name on this list.

However, if ‘Dimma’ is able to claim his third flag after a season of deafening off-field noise, he’ll be like Carbine in the straight come awards night.

The two-time premiership coach and player has his experienced list humming at the right time of the year once again. The public tar and feather job he performed on Chris Scott and his Cats would have left the other six finals contenders sleeping with a light on.

Hardwick’s ability to not only continue to mine gold from his star fleet of Cotchin, Martin, Riewoldt and Lynch is commendable. However, it is his competence in rapidly elevating the consistency of lesser lights such as Balta and Baker that is the true testament of his coaching prowess.

Of all the coaches that will be involved in this year’s finals series, none have a resume that suggest they are capable of eliciting contemporary glory like Hardwick.

Some may claim that has lost a modicum of public respect due to some suspect comments this season, but you can be sure that the former midfield agitator isn’t losing any sleep over any of this. When his head hits his hub pillow, it is almost certain that images of adding cup number thirteen to the Tigerland trophy cabinet pervade his slumber.

Having taken out the award last season for steering his team to second place, Chris Fagan has only gone and repeated the dosage this season.

Sure, the feat was projected this time, but for replicating the achievement despite this weight of expectation, the Tasmanian must be applauded.

.@brisbanelions coach Chris Fagan was named the 2019 Monjon Allan Jeans Senior Coach of the Year after taking his side from five wins in 2018 to 16 wins in 2019.

Fagan’s Lions ended 2019 with a ten-game difference between wins and losses with a percentage of 118.3. This same divide has been replicated this season, but with an improved ratio of 124.7.

Progress? It seems so.

The stats wise and contrarians among us will argue that these numbers cannot be consumed this raw, but as someone who once held a steak tartare down, I beg to differ.

With the double chance and home finals sewn up, The Lions look best placed for a proper premiership tilt for the first time since 2004. With another season of tread on his cub’s paws, Fagan will be hoping that a repeat of their 2019 post season fortunes isn’t imminent.

"We don't wanna just be a flash in the pan club."

The straight sets exit from last season will have given Fagan grief for the entire summer, but should this be rectified, it wouldn’t be a stretch to consider his name as the favourite with the odds makers.

From the chopping block to minor premier, Ken Hinkley has woven magic from a previously unacclaimed loom this season.

Having been placed under unnecessary pressure when David Koch stated in February that it was ‘finals or bust’ for Hinkley’s future, it seems only Willy Wonka’s elevator has a greater ability to shatter ceilings.

If the Power mentor does somehow miss the coach’s top gong this season, a secondary award should be struck and awarded to him for having endured Kochie’s nasal whines for eight seasons.

Is Ken Hinkley the coach of the year or it someone else?

Hinkley has managed to turn eleven wins in 2019 into a fourteen win McClelland trophy winning season in 2020. All of this was done despite a 22% decrease in regular season games and according to a multitude of pre-season pundits, a weaker list.

The only knock on the fifty-three year old’s year is that his team’s trio of losses came at the hands of fellow finals contenders – Brisbane, St. Kilda and Geelong.

Perhaps a reprisal of a ‘rev up’ from his amateur days will have his current crop walking taller come finals.

This clip of Ken Hinkley revving up his boys in a Grand Final will never get old. pic.twitter.com/gKjTw3kpze

Should Hinkley deliver Port their second AFL premiership, he is realistically the only nag running in this race.