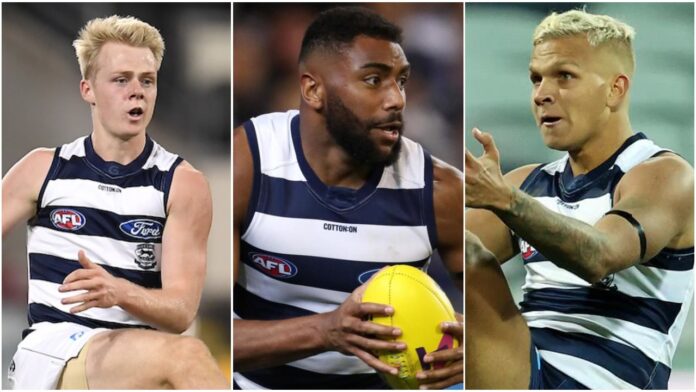 Geelong are making a strong case for a premiership in 2021, having notched up win number 11 from their past 12 games on Saturday in the form of a 20-point victory over North Melbourne.

While it wasn't pretty viewing for all four quarters, the Cats were able to hand the in-form cellar-dwellers albeit with howling inaccuracies in front of goal.

The victory keeps Chris Scott's side in second place and breathing down the neck of the Western Bulldogs, as the two clubs are separated by percentage.

The weekend's win was highlighted by a one-two Guthrie punch, as brothers Cameron and Zach accumulated 57 disposals between them.

While Cameron's 29-touch outing remarkably falls short of his season disposal average, it was Zach's performance in defence that offered Scott another selection headache in the form of a blessing.

Zach was a late inclusion for Saturday's match in Hobart, and took his first opportunity in the senior side since Round 11 in style, amassing 28 possessions, 13 marks, 11 intercepts, and five inside 50's at a disposal efficiency rate of 82.1%.

The performance is the latest star-showing by a fringe Cat that is looking to hold onto a highly-contended place in Scott's best 22.

The Cats' defence ranks No.1 in the AFL off the back of conceding just 30 goals across their past five matches - resulting in wins against the Bombers, Blues, Dockers, Tigers and now Kangaroos.

It's hard to see Guthrie losing his place in Geelong's defence next week as they take on finals hopefuls Greater Western Sydney, meaning late out Tom Atkins will be contending for his own spot in the side after being a last-minute withdrawal due to back soreness.

Veteran defender Lachie Henderson is also set to demand a spot down back for this weekend's clash at Kardinia Park should he be named fit following a calf complaint.

It's not just the defence that Scott is having sleepless nights over, with a list of stars currently occupying the casualty ward and eyeing a return before finals.

Star recruit Jeremy Cameron is working toward a comeback late into the home and away season, while the likes of Mitch Duncan and Gryan Miers are also hoping to make a return as the club pushes towards another finals finish.

Once Cameron is cleared to return, Chris Scott may be forced to make a tough call to accomodate the quartet of attacking options, and it's not only their talls that are the tough magnets to move.

The rise of small forward Brad Close looks to have placed him atop Scott's pecking order for goal-sneaks, with his clean use of the ball playing a key part in linking up the Cats' attack.

The Mount Gambier product has edged ahead of Miers and former Bulldog Luke Dahlhaus, who also looks to be hitting his stride at the back-end of the season.

The trio of small forwards are set to fight for limited opportunities in Scott's forward structure, with Close and Dahlhaus able to prove their worth as Miers nurses a leg injury for the next month.

Once the mercurial dead-eye makes his timely return come September, it is sure to cause a further stir to Scott's selection melting pot.

Then, when gauging your focus to Geelong engine room, it's no hidden secret the Cats are loaded with a plethora of options in midfield.

The household names of Dangerfield, Selwood, Menegola, Duncan and the aforementioned Guthrie combine to load Scott's on-ball arsenal to be as competitive as any rival's.

Add in the depth of veteran duo Isaac Smith and Shaun Higgins, the service of Brandan Parfitt and the constant case Quinton Narkle makes for himself, and you can see why Scott would be open to fielding 30+ players each weekend.

Boosting the depth are the likes of Sam Simpson, Mark O'Connor, Jordan Clark and Charlie Constable, with the latter unable to break into the senior side despite multiple 40+ disposal efforts in the VFL.

Collectively, Geelong - and more so Chris Scott - face a dilemma that can only aid the club's push for a premiership at season's end.

The 'next man up' mentality is the exact type of headache a coach is happy to deal with as they near September, with Scott set to provide answers to the tough questions in the coming weeks.

As shown by Zach Guthrie on the weekend, every chance must be taken for those looking to earn their place at Kardinia Park amid yet another flag stake.