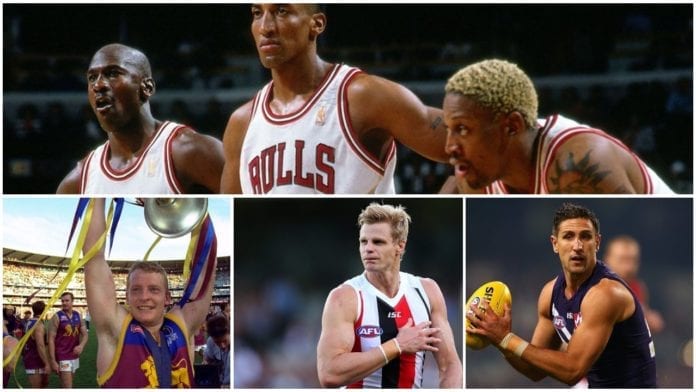 The buzz surrounding the Chicago Bulls The Last Dance documentary has got everyone talking.

It follows the legendary NBA team throughout the 1997–98 season in their pursuit of a second threepeat and the storylines, hardships and good times that came with it.

"Michael Jordan, he was a leader, the best player and he demanded so much from his teammates," Lloyd said.

"Scottie Pippen, the underrated star, wasn't paid what he should've been. But still did it and when he didn't play they missed him. And Rodman, they (the Bulls) targeted him, the flawed genius. But they got him for what he could bring to the team."

Lyon drew comparisons from the three stars to trios that he has coached and some of the greatest AFL teams of the modern era...

Lloyd said: "Vossy is like Michael Jordan, the absolute general. Nigel Lappin the Scottie Pippen, so underrated Lappin for what he brought to the Brisbane Lions. And then you've got Aker, who I'm told, not sure how true it is, was called the consultant at times. There was Brisbane players who wanted him out of the team and Leigh Matthews said: 'Dont look at him like a teammate at times, like at him like a consultant who can help us out on weekends.'"

Lyon said: "When I first got there (to St Kilda) Nick (Riewoldt) was a young key forward who was really emerging. But he wanted every ball that went into the front half. It's like Jordan under Doug Collins, the offence revolved around him. And then Phil Jackson comes in with the triangle offence to make it about the others. And in Game 5 vs. the Lakers (of the 1991 NBA Finals) Jordan runs to the decoy, opens it up, throws to (John) Paxman and they start nailing the three-pointers."

Lyon said: "Ryan Crowley when I first got to the club was underperforming, wasn't doing a role, they wanted to get rid of him. I said: 'Give me 12 months,' the old story, I gave him an opportunity. He said he'd dedicate himself. I'm pretty sure he won the best and fairest in 2012."

Michael Jordan was the 'Leader', Scott Pippen was the 'Underrated Star' and Dennis Rodman the 'Flawed Genius'.

Ross Lyon compares the Bulls template with some of the greatest teams in AFL history. #9FootyClassified | Watch @channel9 pic.twitter.com/7ZC1uNeMBB