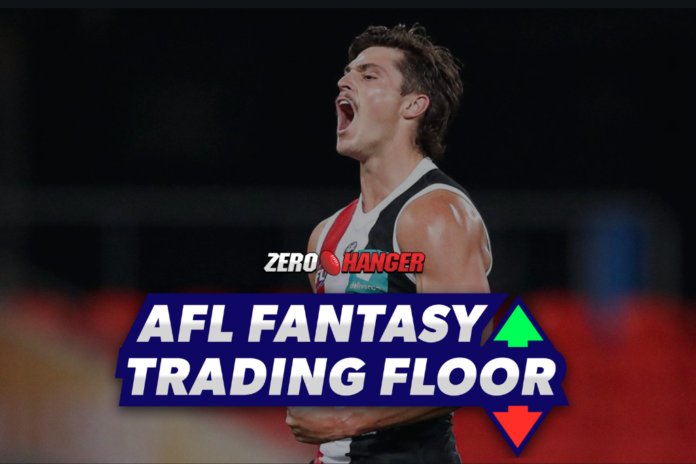 With the season’s first month now in our rear-view mirror, the road ahead of coaches is either wet and windy or dead straight like Route 66.

As many premium players are still posting irritatingly small scores, the time is now to hit the trading floor in search of their replacements.

Whether you’re tearing your hair out on a weekly basis or your spinnaker is up, and you are sailing with a big breeze, we are once again here to lend a helping hand.

Here are yet another set of names coaches should be buying, selling, or keeping tabs on ahead of lockout.

Despite a podium finish in last season’s Brownlow count and an average of 108.3 points across this season’s first month, Jack Steele’s ownership still sits below 10%.

The first-year skipper proved against Essendon that even when his teammates refused to put in a shift, his form remained consistent like Greenwich mean time.

With another tonne against the Eagles in Round 4, if your midfield requires a steadier, consider the man of steel.

Although injury delayed his start to the season, the bearded defender once again proved that he is not afraid of the footy.

Despite being a known quantity at the level, Houli’s ownership percentage currently sits at two, so like Steele, if your back six is looking shaky, keep the 32-year-old in mind.

After a relatively slow start to his time as a Hawk, Chad Wingard has exploded in 2021.

Although his side currently sits at 1-3 after a month, the former first round pick is averaging 24.6 touches, a goal, and 107.5 Fantasy points across his three games so far.

The 27-year-old looks quick, he looks slick, and should you be unimpressed with your front six so far this season, look to move the Murray Bridge man in as soon as possible.

Even though the former father-son selection has perennially scored well in past years, his ownership currently sits at just 1%.

With an average of just 85 points across the first four rounds, it isn’t hard to see why plenty of Fantasy freaks have steered clear of adding Hunter.

However, after 91 points against Brisbane on Saturday afternoon and a season high of 115, if the premiership Pup is within your 30-man squad, don’t move him on just yet. If not, track his form before pulling the trigger.

Still, with a Round 5 breakeven of 147, if your bank balance is hemorrhaging, you may wish to ignore this advice.

After 16 touches and zero tackles against Essendon in Round 3, there were plenty of St. Kilda fans calling for Brad Hill’s head.

Although a week truly is a long time in football and the Western Australian has proven he can post tidy totals, hold off on adding the ‘Jekyll and Hyde’ midfielder to your side for the moment.

With 56 hitouts and 85 Fantasy points in Round 4, Marc Pittonet didn’t need to hit up Cavill Avenue to have a night out on the Gold Coast.

Due to the Blues’ dearth of fit talls, the former Hawk’s job security at Princes Park is at an all-time high.

With a price tag below 600k and an average of 71.8 points across the first month of the season, the 24-year-old appears a tantalizing prospect for those with struggling ruck stocks.

However, as the Suns were unable to actually field a ruckman on Saturday night, hold off on including the Oakleigh Charger’s product until he beats some better opposition.

With an average of just 66.7 points, a season low of 40 and no scores above 100, it would be fair to say that Jordan De Goey’s start to 2021 has been underwhelming at best.

Due to these abysmal scores, the former first round pick’s price has dropped 55k within the space of a month.

With these numbers in mind - as well as the news that yet another hand injury could see him sidelined - if you are part of the 13% of coaches that has enigmatic Magpie in your side, move him on now to avoid further pain.

After a sharp start to the season that saw him hit a high of 111 points, Caleb Daniel turned to water in Ballarat, producing a tiny total of just 20 points.

With this measly return compounded by the news that he will miss his side’s clash against Gold Coast due to suspension, coaches have hopped off the pint-sized Pup in a big way.

If you still have the South Australian in your back six, make sure you follow suit at the selection table this week.

Despite a season high of 119 and a more than healthy average of 84.8 across four weeks, a syndesmosis injury on Friday night has brought Zak Butters’ superb start to 2021 to a screeching halt.

With a price boost of 21K so far this season, Butters’ owners have seen return on their investment and should have no trouble flipping him without a hit to their salary cap.

Despite his Dons going down in heartbreaking fashion, Nik Cox’s 18 disposals, one goal and 93 Fantasy points should see him snap Sydney’s streak of Rising Star nominations this season.

After channeling his ‘surname-sake’ with a century on the MCG last week, Chad Warner backed up his breakout performance with another 95 points on Thursday night.

Following a few lean weeks in terms of total scores, North Melbourne’s Tom Powell rewarded the 47% of coaches that selected him, with 91 points against Adelaide.

Although unable to break the 70-point barrier, Lachie Jones looked adept at the level, with 68 points in his debut against reigning premiers Richmond.

The pair of Jordans that have been giving me headaches have been shifted on for the mulleted Lachie Jones and the impressive Josh Dunkley.

Jordan Clark is scoring like a rookie and has to go despite the easy matchup against North Melbourne at home this week.

I'm a bit stuck on my second trade - do I shore up my bench or upgrade a mid-pricer? Caleb Serong has been disappointing, is getting low TOG and is clogging up a spot in the midfield.

Turning him into the underpriced Titch could net me an extra 30+ points every week and provides an extra captain option.