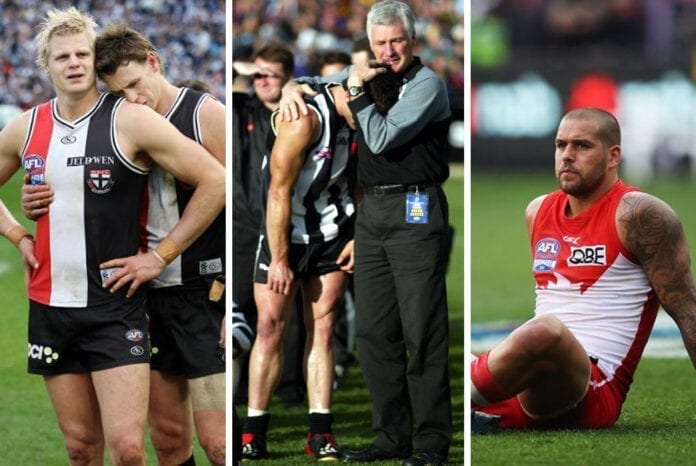 The Zero Hanger team have identified and ranked the best 10 teams to never win a flag since 2000.

Two important factors made up our criteria – each club could only be represented once and was ineligible if they won a premiership the season before or after.

Without further ado, here are our 10 best AFL teams to never win a premiership since 2000.

You can make a case for the 2009 team considering how agonisingly close they were to toppling the Saints that year, but the addition of Barry Hall in the 2009 off-season made the Bulldogs one of the more feared sides heading into the 2010 season and after two consecutive preliminary final defeats, looked like premiership favourites.

It was a side that was littered with quality talent – Matthew Boyd, Daniel Cross, Ryan Griffen, Adam Cooney and a young Callan Ward in the middle. Brian Lake, Dale Morris the key pillars in defence, whilst they had the run and rebound of Lindsay Gilbee and Ryan Hargrave.

The addition of Barry Hall was supposed to be the final piece of the puzzle, and with 80 goals in 2010, he played his role of the team. They had Daniel Giansiracusa, who managed to slot 35 goals for the season. They also had Jason Akermanis and Brad Johnson, albeit in the twilight of their careers.

MELBOURNE, AUSTRALIA – SEPTEMBER 03: Barry Hall (L) of the Bulldogs celebrates a goal during the round 24 AFL match between the Western Bulldogs and the Fremantle Dockers at Etihad Stadium on September 3, 2011 in Melbourne, Australia. (Photo by Hamish Blair/Getty Images)
BackNext

Brisbane recruit Nakia Cockatoo in doubt for Round 1