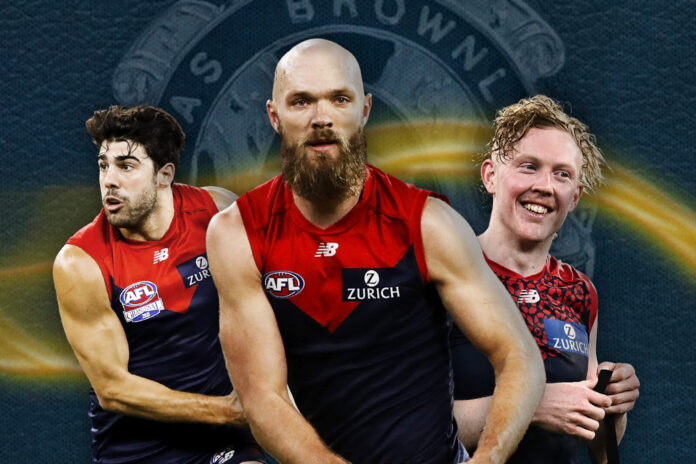 Clayton Oliver, Max Gawn, and Christian Petracca have combined for a colossal 178 Brownlow Medal votes in the last three years. And yet, none of the three has been crowned the AFL’s best and fairest – such is the burden of playing in an elite midfield unit.

This year, Melbourne finished the count with a total of 94 votes, the most of any team in the competition. Oliver finished the night equal fourth with 25 votes, while Petracca finished 6th with 24 votes.

So why, with all the team success and heavy Brownlow favouritism, have the Demons not found a winner in the last few years?

Compare their night to Brownlow winner Patrick Cripps and Carlton. There was a gap of 15 votes between himself and his nearest teammate Sam Walsh.

The same is true for the other high-finishers, Lachie Neale, Touk Miller, and Andrew Brayshaw, who all put distance between themselves and the next-best teammate.

History tells us that it’s still possible to win Charlie next to elite teammates – remember West Coast’s Judd and Cousins divvying up the medal in 2004 and 2005, or Brisbane’s Akermanis and Black who won in 2001 and 2002 respectively.

But, there’s no doubt the excellence of this trio has made it difficult for them to win full votes in each round.

While Oliver (25) and Petracca (26) still have enough time to win a Brownlow, Gawn, now 30, has had his best chances slip away.

In 2018, the dominant ruckman won the AFLCA’s Champion Player award and was a popular pick for the year’s Brownlow Medal. Gawn finished 4th with 20 votes, with fellow Demon Angus Brayshaw surprising all with a 3rd-place finish despite not earning an invite to the event.

Ruckmen haven’t faired well in the AFL’s best and fairest. The most recent to win was Adam Goodes in a ‘ruck’ role in 2003, though he was closer to a fourth midfielder who would contest taps.

Take the time machine back to 1992 and you’ll find Bulldog Scott Wynd holding his medal proudly, the last genuine ruck to do so.

So, even with the competition on Gawn’s own team, the odds weren’t stacked in his favour. Maybe he can take solace in his tap work guiding his midfield mates to the award in the near future.

Having two of the competition’s best midfielders in one squad can be a beautiful thing. The emergence of Oliver and Petracca brought Melbourne their first premiership in 57 years, and has made them a nightmare matchup over the last two seasons.

The finals series may have been a disappointment, but the Demons were red-hot favourites halfway through the year. They finished second overall on the ladder, and just like the 2021 AFL season, Oliver was voted by coaches as the Champion Player of the Year.

In their premiership-winning season, Petracca was an explosive force in the finals, winning the Norm Smith medal and vaulting the club to an unbeatable run.

If Oliver is the ultra-consistent contested footy beast, Petracca is the X factor that takes Melbourne to the next level when switched on.

The one-two punch are as good as any midfielder duo, and they’ll continue to take Brownlow votes from one another until they retire.

Is the Brownlow voting system flawed?

There are a lot of issues with the Brownlow Medal. It’s a subjective voting system that heavily favours the midfielders that the vote-giving umpires are closest to.

Followers who lead their midfield unit are always going to do better than those who share stardom with teammates. Yet, who can deny that Patrick Cripps had a great – and deserving – Brownlow year?

The award might not be the truest indication of the AFL’s best player, but it does reward consistency and team success across the year.

For superstars like Gawn, Petracca, and Oliver, team success and the impressive individual honours they’ve collected are enough to tell the competition they’re something special, but they’ll still be hoping to top the Brownlow leaderboard one of these years.