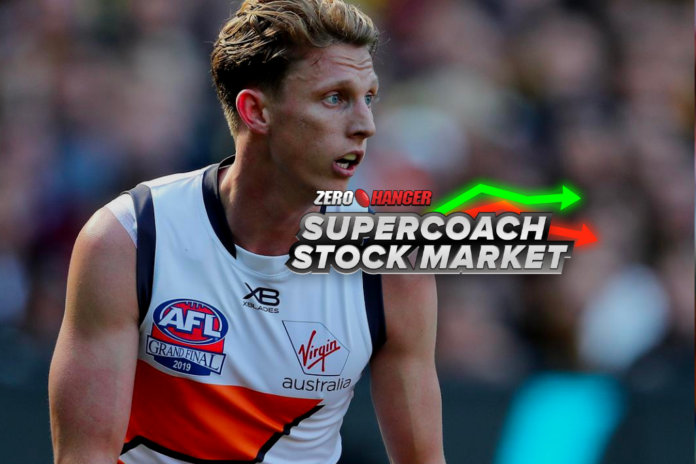 It's getting close to the halfway point of the season with SuperCoach owners well in the swing of things with downgrading and upgrading rookies, as well as trading away out-of-form players and injured premiums.

SuperCoach teams should be looking to take shape as the bye rounds approach, and it would be wise to make sure your 'boost' option for trades are preserved for these series of lulls.

However, with popular premium Jack Steele going down with injury, and other popular selections like Stephen Coniglio underperforming, it is necessary to make changes to ensure teams are still strong as the season progresses.

With that being said, it's time to look ahead to next week and see who to buy, hold and sell as Round 10 nears.

The mature-age rookie is now on the bubble and is set to skyrocket in price after the next round.

The 24-year-old was a popular selection at the start of the year, before getting injured in the pre-season which saw a lot of owners take him out of their sides.

Now Clark has played two games, averaging 18.5 disposals and 83 SuperCoach points, which has given him a breakeven of -97 and a projected price rise of $80.3k so he won't be cheap for long.

Close to 20,000 owners have traded in Clark this week and with good reason, as his scoring ability and quick cash generation will see him make his way onto the field in many SuperCoach teams this week.

'Dusty' is back from his break from football and has started to gain momentum in his first two games back, which will please SuperCoach owners as his dual position status and his obvious ability to obtain SuperCoach points make him a valuable selection for your side.

Since returning from his break, Martin has scored 83 and 119 and does not look like a footballer who had missed seven weeks of footy.

The triple Norm Smith medallist has a breakeven of 98 so he shouldn't fluctuate in price too much, but with popular selection Stephen Coniglio underperforming, Dusty would be the perfect swap if you have a bit of cash in the bank.

The Tigers play the struggling Bombers this week in the Dreamtime clash, and 'Dusty' loves the big stage, collecting 27 disposals and kicking 3 goals in last year's corresponding fixture, so hop on before everyone does in the near future.

The reigning Brownlow medallist is going well under the radar, only in 2.5% of teams, but he has hit form as of late and would be a great point of difference in your lineup, especially with popular midfield premium Jack Steele going down with injury.

Currently averaging 103.8 SuperCoach points on the season, which is down on his usual output from last season, Wines has hit form in the past three weeks with a three-round average 121 and a 155 point performance on the weekend with 32 disposals and two goals, should tempt owners to trade him in this week.

Has a low breakeven of 59 and a projected price rise of $17.9k, and Wines' recent form tells us that he'll continue to rise in price, so hop on now before he gets too expensive.