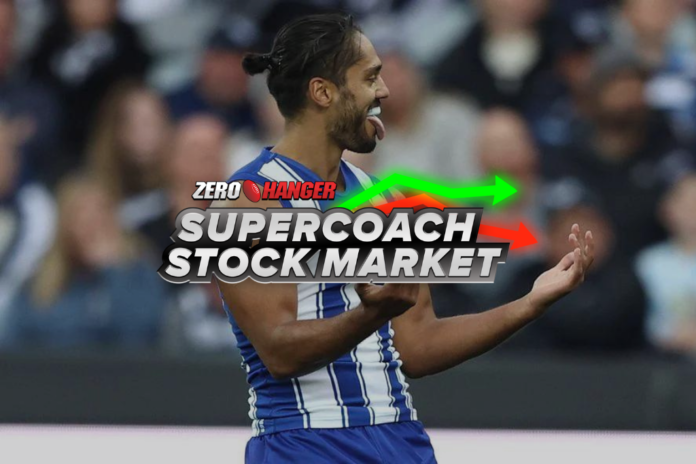 As the AFL Supercoach season heads into it's final bye round, and owners' trades become lesser and lesser, it is so important to nail your trades to set yourself up for a strong run home in the fantasy season.

Check out who to trade in and out, potential rookie downgrades, and point of difference players that may fly under the radar of rival coaches.

The Kangaroos forward is fast becoming a must-have in your SuperCoach forward line.

Currently averaging 95.4 points, which was offset by a 6 point game in the opening round of the season due to injury.

With a breakeven of 56 and a projected price rise of $33.6k, it'd be a wise move to get him into your team before he gets too expensive.

The dashing Giants defender is as smooth as they come, and he is just starting to hit some form.

Don't be fooled by his 90.2 average over his 6 games, he missed the start of the season with a bruised liver and took a few games to get his legs back under him.

Averaged 111.2 over 16 games in 2019, so you know he can score well with his elite kicking skills and disposal efficiency.

At a touch over 500k, this might be the cheapest we see him for the rest of the season, and looms as a perfect upgrade option for Lachie Jones or Tom Highmore as the bye rounds come to a close.

The 2020 Brownlow medallist is just returning from a syndesmosis injury which ruled him out for six weeks.

At the time, most SuperCoaches had him in their teams due to him leading the league in SuperCoach points in 2020.

Owners were disappointed to start off the 2021 season, with Neale averaging only 81.5 points through his first four games.

Neale then exploded with a 157 point effort against Essendon but was then struck down by injury against Carlton in round 6, where most owners traded him out.

Now fresh off the bye, and holding a 112.3 three-round average, the Lions star is ready to return to some elite form, and is only in 8% of teams at the moment.

Would hold off trading in this week due to a 165 breakeven and a projected price drop of $30k, but next week is a perfect time to bring him in at around the $540k mark.

The rookie Crows forward has been a quality cash cow for SuperCoach owners, but his cash generation has hit his ceiling.

With a three-round average of 51, a breakeven of 73 and the bye this weekend for the Crows, it is the perfect time to either downgrade to a rookie cash cow, or upgrade to a forward premium.

With news that the star Collingwood defender has suffered a Grade 2 PCL tear and is expected to miss 8-12 weeks, it is time for the 10.5% of Supercoach owners to trade out.

It is a shame as he had been in really good form over the past five weeks, with a five-week average of 100 points per game.

The Giants ruckman who debuted in round 1 has been a revelation of a cash cow through the eight games he has played, rising $262k in that time frame.

Although he has generated cash, he has been hard to use on the field for most Supercoach owners who own both Gawn and Grundy in particular.

Another problem is that Shane Mumford is still around and plays every second week almost, which limits Flynn's scoring ability and job security within the team.

Look to downgrade for Ned Reeves [$123,900] as a handy replacement and will free up $260k for you to upgrade another rookie to a premium.

The 211cm ruckman for the Hawks has enjoyed a fantastic start to his career, averaging 86 points in his first 2 games of his career.

Reeves is on the bubble with a -98 breakeven, meaning his price will rise rapidly after his next game, with a projected price rise of $80.7k.

This is the week to downgrade Flynn or whoever else was on your ruck bench, as he will rise over $200k if he plays this weekend.

Watch this space, as he was a late out against the Swans on Friday, and his replacement Jon Ceglar was instrumental in the win, but look to get him in regardless as there are four trades to use up for this weekend's games.

Picked up from the mid-season draft by the Hawks, Newcombe was brought straight in to the team against the Swans on Friday, and played extremely well.

With a record 14 tackles on debut and a score of 75, Newcombe looked comfortable at AFL level.

Has only played the one game, so you can afford to wait for next week to bring him in, but with seven teams having the bye this weekend, Supercoach owners will need all the players they can get this weekend.

The Eagles midfielder, and son of Adelaide Crows legend Tyson Edwards, has enjoyed a great start to his career with the Eagles.

With scores of 63 and 96 over his first two games, Edwards will likely have a projected price rise of at least $70k.

Eagles have the bye this weekend so next week is the best opportunity to bring him into your team before it's too late.

The Gold Coast Suns midfielder is an absolute gun and ball-magnet, averaging 30 disposals, 6.5 tackles and 118.7 SuperCoach points per game.

A steep price tag over $600k, but Miller is worth every cent, with a five-round average of 128.6 points per game, and is only in 6% of teams in the competition.

A great point of difference in head-to-head match-ups if you're willing to invest.

The classy and consistent Cats midfielder has always been overlooked in SuperCoach, despite averaging over 100 for the past five seasons, but Duncan delivers week in, week out, averaging 109.1 points per game and is only in 5% of teams.

Look to purchase to have a different look midfield to your opponents whilst still scoring strongly.

Crisp is a classy player, and despite a defender tag in SuperCoach, Crisp often plays through the midfield for the Magpies, averaging 26.7 disposals per game.

In what has been a tough year for the Magpies, Crisp has played at a consistently high level, averaging 100 points per game, but is only in 4.4% of teams.

With Darcy Moore out, Crisp may take on more responsible in defence whilst also going through the midfield.

A handy option to basically have a midfielder who hardly anyone owns in your Supercoach backline.