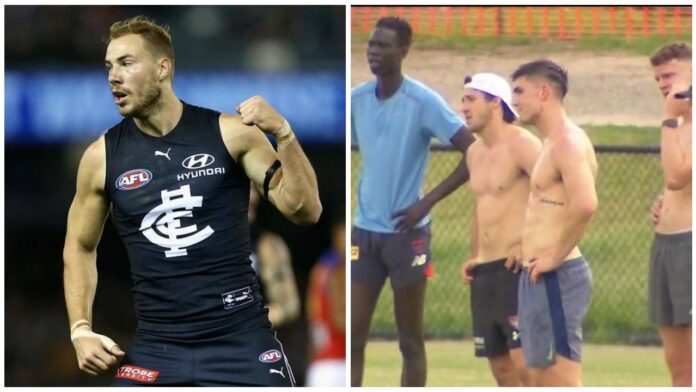 Players from Essendon, Carlton, Hawthorn, Collingwood and North Melbourne have come together to get a head start on pre-season training.

Jeremy Howe, Taylor Adams, Brayden Maynard, Patrick Lipinski Andrew McGrath, Jordan Ridley, Harry McKay and brother Ben McKay have been getting together at an oval in Melbourne's South-East to train together and get the miles in the legs.

Club allegiances are out the window as @AFL players take on a fresh approach to off-season training. One Magpie has declared the combined sessions are here to stay, as an emerging Bomber goes head to head with a Blue. https://t.co/5zYfOfohG3 @cleary_mitch #7AFL #7NEWS pic.twitter.com/7NhHHgEBLM

The star-studded training session was also participated in by draft hopeful Mac Andrew, who will be learning off some of the game's best talents ahead of draft night.

Speaking to Channel 7 News, Howe said that the hybrid training sessions were a positive sign as to how communal the AFL has become.

"You've got two choices, you can either do your own thing or we can all come together and train. There's guys from Essendon, Carlton, Hawthorn and Collingwood, we all just came together.

"The seven or eight of us just came up with a bigger session altogether, that probably wouldn't happen five years ago.

Essendon defender Jordan Ridley said the sessions were a great opportunity to learn from one another but also get an insight into how opponents think and play.

"We've learnt a lot off each other," Ridley said.

"It's good having blokes from different club's and getting different perspectives. It's been really enjoyable. He's a super player, the more I can do it now the more tricks I can learn for the end of the season."