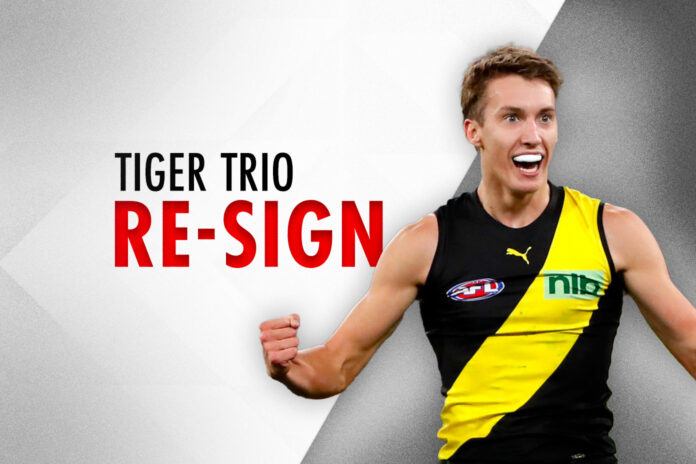 Richmond has locked away the remainder of their 2021 draft class, tying the futures of Judson Clarke, Sam Banks and Tom Brown to Tigerland until the end of 2025.

The trio joins both Josh Gibcus and Tyler Sonsie in inking on at Punt Road, meaning each of the quintet of blue-chip kids will remain in yellow and black for at least the next three seasons.

Across the course of his debut season, Clarke managed 15 appearances in a yellow sash, slotting 16 goals in the process.

“Judson has not put a foot wrong since arriving at the football club and was rewarded with senior opportunities this year,” Richmond's GM of Football Talent Blair Hartley stated in a club-released statement.

“We look forward to him using that taste of AFL football as motivation to continue to grow his game.”

While still yet to debut, Brown impressed at VFL level in 2022 after being plucked with the 17th pick of last year's draft.

“It was pleasing to see Tom put together some consistent form across half-back at VFL level after overcoming some interruptions early in the year,” Hartley said.

“Tom showed us all the traits that made us rate him so highly in his draft year and we are really excited about what he can achieve in 2023 and beyond.”

Having joined the club from the Apple Isle, Banks has also been forced to bide his time before being blooded in front of the Tiger Army/

Yet, like Brown, the youngster put his best foot forward in the reserves during his debut season at the club.

“Sam has worked very hard since arriving at the Club, setting a high standard for all of his teammates to follow,” Hartley said.

“On the field, we are really pleased with Sam's versatility, poise and endurance. We are looking forward to seeing what he can achieve in the coming years.”