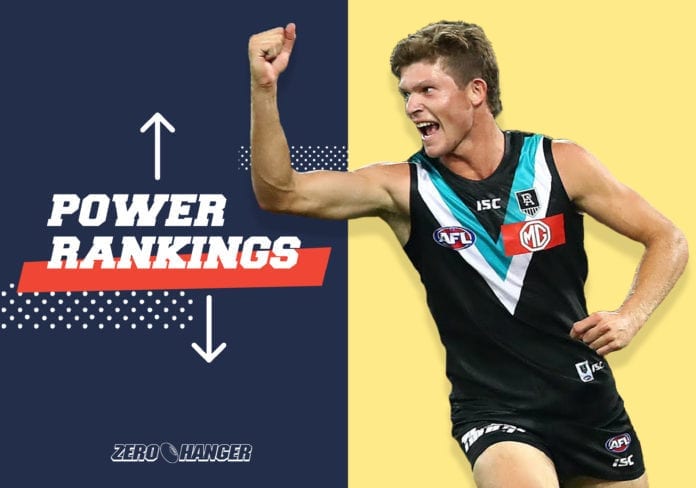 The Giants were superb on Saturday night. Their fire power was at its best, managing to score 17 goals in the shortened format. The managed 17.3 in an incredibly accurate display and were simply a class above the Cats. It goes a long way to say that Geelong didn’t do much wrong and played pretty well, but they never really looked like threatening the Giants. A really really good start for last year’s runners-ups.

Statement made! The Pies were systematic in their dismantling of the Bulldogs on Friday night. From start to finish Collingwood were a class above and kept the Dogs at arms length all night. Brody Grundy stood tall as the best player on the ground, dominating Tim English and setting up the Collingwood midfield all night. The Dogs are seen as a top four contender but the Pies showed they are a premiership contender.

Richmond won on Thursday night but you’d be hard pressed to say they did so impressively. They were dominant in the first 10 minutes banging on five goals to zip. They were incredibly clean and their pressure was elite. However, from that point on they weren’t too flash. They were quite poor in the second half allowing a injury depleted Carlton back into the game.

The Tiger were 50 points up and that quickly became a 15-point buffer. They steadied and kicked clear again, but they lost the inside 50 count. A better team and stronger forward line may not have been as forgiving as Carlton. A win is a win though.

Clinical and borderline routine, that’s a fair and adequate way to describe West Coast’s win over Melbourne on Sunday night. In the last game we will see for a while the Eagles were always in control. Fast starts seemed to be in vogue over the weekend and the Eagles jumped the Demons in the opening quarter.

Tim Kelly fit in seamlessly and provided polish as he got to know his new teammates. West Coast were never challenged as they cruised past Melbourne and showed that their dominance in Perth is not subjective to crowd attendance.

What. A. Win. The Hawks upset the Lions and did so convincingly. They defeated Brisbane by 28 points at the MCG and laid down their credentials as a top eight side. Hawthorn have been widely tipped to either jump up into the eight or slide down toward the bottom parts of the ladder and Sunday’s win may have been the strongest indication of which way they may go.

Tom Scully was back to his aerobic best, running all day. Tom Mitchell rekindled his relationship with the sherrin, collecting disposals at will. They put more and more distance between themselves and Brisbane as the game went on. Class display.

The Power had the thankless task of beating the Gold Coast. They did so, and well, however, beating the Suns doesn’t win you many admirers. But there was plenty of good to be seen if you look impartially. The Power were without Charlie Dixon and there was pressure on them not to slip at the first hurdle.

They had a training run at Metricon and were clearly far too good for the young Suns. The Power kicked clear in the second quarter, going into the main break with a 40-point lead. They took their foot off the gas in the second half which isn’t ideal but their work was well and truly done by then.

The Lions were clearly second best on Sunday. They lacked skill and composure all day and while their effort indicators were there, the polish wasn’t. The stats read quite evenly right across the board, they just couldn’t seem to link it all together.

A loss to Hawthorn at the MCG may not look anywhere near as bad come the end of the season either. There were good signs in the defeat, with Eric Hipwood bagging three goals, while Lachie Neale collected a game high 26 disposals and a goal.

A stirring comeback that saw Rhyce Shaw and his men stand out over the weekend. The Kangaroos were led by Ben Cunnington who dominated the final quarter at Marvel Stadium and guided North to an inspirational victory.

Todd Goldstein proved he is all class – he took the game by the scruff of the neck and bullied Rowan Marshall in particularly when the game was on the line. The North Melbourne leaders stood up when their club needed it and got them over the line.

The Cats weren’t that bad. They were beaten by a very good GWS side without doing a whole lot wrong. However, it was the same issue as last year’s preliminary final – they just seem to be half a step off the competitions very top teams.

For a moment in the final term they looked like they may begin to claw their way back into the game but GWS quickly snuffed that out. The Cats need to find a way to bridge the gap and it can’t always be put on the shoulders of Dangerfield, Ablett and Tom Hawkins to lift the team.

The Swans were terrific in Adelaide. A win over the Crows may need read to impressively but this was a great win none the less. The Swans were three goals down at quarter time in a very accurate first term that saw nine goals no behinds.

Sydney turned the game around in the second term and never looked back. Oliver Florent was terrific and looks to have taken a step up, Isaac Heeney was incredible, starring with 4 goals and flying for everything in his orbit. While they suffered a scare from a late Adelaide fightback, they held on for the four points.

A win is a win and four points are four points. But the Bombers were not convincing and very very lucky to sneak through for the opening victory. They seemed to be in control of the game right up until they weren’t. Within the blink of an eye Fremantle had forced their way back into the game.

Cracks appeared, stand-in skipper Michael Hurley gave away a reckless and crude 50 metre penalty and all of a sudden, it seemed like the Dockers had control. The Bomber never looked safe until the siren went with the ball deep in Fremantle’s forward line. Dylan Shiel was great while new recruit Jacob Townsend kicked three goals.

The Dockers were incredibly brave. Their list is riddled with injuries and skipper Nat Fyfe had an eye swollen shut. And yet they very nearly stole a win from under the Bombers’ nose. Justin Longmuir would be happy with the signs he saw but was left frustrated by the slow start.

Rory Lobb showed signs of the player Fremantle thought they were getting when they brought him in from GWS, while Fyfe was nothing short of inspirational. Very competitive start for Freo.

Again a slow start cost Carlton against Richmond as the Blues conceded the first five goals before finding their feet. By then the game was as good as gone. The Blues fought back incredibly well and halfway through the last quarter looked a genuine chance to steal the game.

Patrick Cripps was immense, while the return of Sam Docherty was a welcome sight. New recruit Jack Martin was electrifying with four goals, all coming in the third quarter. Martin looks like he could be an incredible acquisition. With no forward line to speak of, especially after Matthew Kreuzer went down in the first term, the Blues showed great fight to get back into the game. A key worry for Carlton will be the tackle count – they laid only 23 tackles for the whole game which is so far from acceptable.

The Bulldogs were the let down of the round. In what loomed as the game of the round, the Dogs never came to the races. They allowed Collingwood to kick clear and they never got close.

Touted as a top four contender and premiership smokie, there were no signs of that being a possibility. Recruit Alex Keath was outplayed, as were most of his teammates. The key defender was exposed regularly but a lack of pressure on the ball carrier from the Bulldogs midfield made his job so much harder. Plenty of work to be done it seems.

Billed as the big movers of 2020 the Saints were awful. The more things change the more they stay the same it seems. The Saints topped up their list in the trade period and yet dished up a typical Saints footy performance.

They had North Melbourne on the ropes before letting them off and even had their chances to win this game even after it seemed lost. Yet, they failed to take their chances and in turn watched the game slip through their fingers.

The Demons went to Perth with nothing to lose and by quarter time they had very little to win. The game was gone by then after Melbourne blew a number of early chances at goal. Their forward line looks bereft of ideas and it’s anybodies guess where their goals will come from.

Max Gawn led well in his first game as captain but Melbourne had no answers for the Eagles. Their ball use was poor and going forward of centre they were aimless and kicking more in hope then with any ideas or structure.

The Suns gave it everything, it has to be said. Their youngsters were as competitive as can be hoped. They were no match for the bigger bodies of Port Adelaide. When the Power skipped to a 40-point lead by half time many would have thought the Suns were in for a ritualistic belting.

However, they battled terrifically in the second half to keep that from happening. While they only managed four goals for the game, and no score in the last quarter, they managed to keep Port Adelaide to just one goal in the second half as well. Positive signs.

The Crows had no answers for Sydney after quarter time and would be flat with their performance. Their new-look forward line showed plenty of signs with the likes of Darcy Fogarty, Lachie Murphy and Tyson Stengle all playing well.

However, they are far from the finished product and it’ll take time before they are. The signs were there and Matthew Nicks would be pleased to an extent. Adelaide have a long way to go.

VOTE: Who is the greatest AFL team of the modern era?

Lyon reveals regret that may have cost St Kilda a premiership

Project Return: The AFL memo sent to all 18 clubs revealed