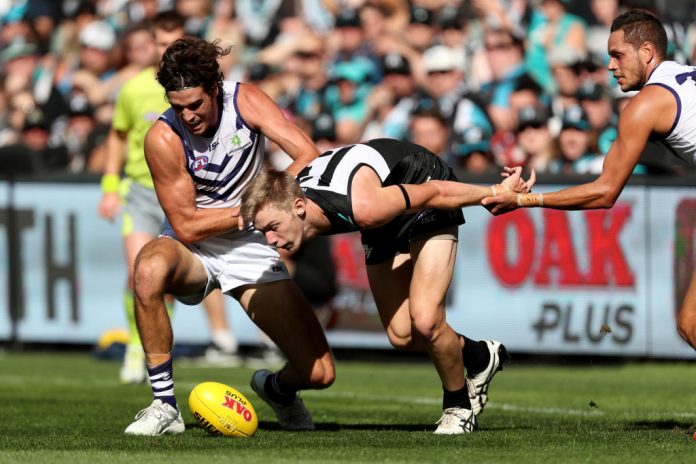 Port Adelaide have secured their young trio for the future, as Todd Marshall, Darcy Byrne-Jones and Sam Hayes have all agreed to two-year contract extensions with the club.

Marshall and Byrne-Jones’ contract ensures that they will be with the club until the end of the 2020 season and Hayes has made the commitment until the conclusion of 2021.

Port Adelaide General Manager Chris Davies is pleased that the young players have chosen to play with the Power for years to come.

Marshall was taken by Port Adelaide with pick 16 in the 2016 AFL National Draft. The Deniliquin product has hit the ground running this season, leading his club with four goals in their season opener against Fremantle.

“He [Marshall] earned his debut late last season and what he showed against Fremantle at the weekend indicates a promising future,” Davies explained to portadelaidefc.com.au.

Byrne-Jones was drafted by the team in 2013 but didn’t make his senior debut until the 2016 season, from which the the 22-year-old has strung together 44-straight games since. He tallied 28 disposals in round one over the weekend and will look to continue his impressive form.

“Darcy has become an important part of our young backline,” Davies said.

“He takes a role each week on a dangerous small forward and continues to develop the attacking side of his game.

Hayes was taken by the Power with their 47th pick in the 2017 AFL National Draft. The young gun is yet to make his debut, but the club has faith in his ability and will look to develop him for the future.

“With all of our bigger guys we want to make sure they have enough time and opportunity to flourish with us,” Davies added.

“Sam has impressed coaches and teammates in the short time he’s been with us. His work around the ground is good and he’s already improved his aerobic capacity.”

The 15 best current AFL stars WITHOUT an All-Australian

Essendon reveal why they passed on Joel Selwood and Cyril Rioli