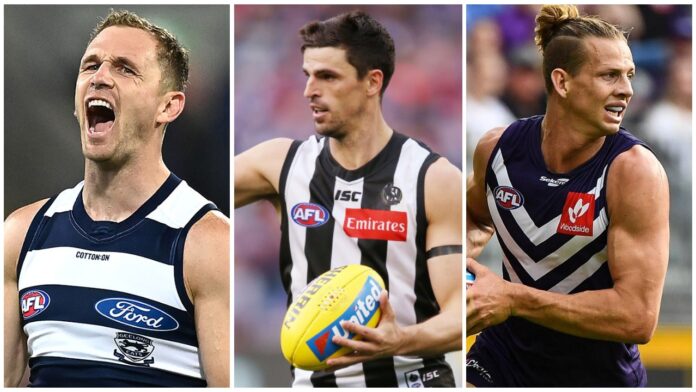 Essendon legend Matthew Lloyd has listed eight teams which he believes should at least consider making a captaincy change heading into next season.

After Richmond stalwart Trent Cotchin stepped down as Tigers captain this week, Lloyd spoke on Footy Classified on Wednesday night about potential skipper changes at other clubs.

"It's got me thinking, where else could there be changes?"@matthewlloyd18 takes a look at some of the captain's around the league that could follow the lead of Trent Cotchin and hand over responsibilities. #9FootyClassified | Watch @Channel9 pic.twitter.com/yBXzZ6Y1Mp

"For all these guys, it's about how can they play their best football next year," Lloyd told the Footy Classified panel.

"I think Stephen Coniglio, it's a massive decision and it would surprise me if he still was the captain.

"Joel [Selwood], do you do the similar thing to what Trent Cotchin has done?

"Docherty has had his health concerns.

"Witts and Swallow, I think Touk Miller is an ideal candidate.

"Pendlebury is coming to the end of his time. Would he do the same as what Cotchin has done? The same for Ziebell."

Ex-Fremantle senior coach Ross Lyon was unsure if Nat Fyfe giving up his captaincy would be a smart move, but named promising midfielder Andrew Brayshaw and experienced defender Alex Pearce as candidates if Fyfe were to pass the baton.

"I'm not sure. If Nathan wants to lead, he's good enough to drag them through. But he carries enormous responsibility," Lyon told Footy Classified.

"It just might lighten the load on him. He'll still lead, but it's up to others to drive the standards. You've got Mundy there and Fyfe, so you've got the support. Maybe it's time.

"I think Brayshaw is a bit young but could do it and Alex Pearce could certainly do it."

Much-maligned Giant Toby Greene has been trialled in Coniglio's injury absence this season and has been advocated as the next long-term GWS skipper, but a joint captaincy with star midfielder Josh Kelly may be more suitable after his long-term re-committal to the club.

Regarding Geary's status as Saints skipper, senior coach Brett Rattan told AFL 360 on Monday: "We've got to have the conversations.

"The idea was to have Geary there to support Steele being a young captain and Geary’s leadership is outstanding. But that will probably be the conversation during the break: Does Geary just hand it over to Steele and be the solo captain now?

"[Steele] has done everything right. He's grown on the field and off the field."