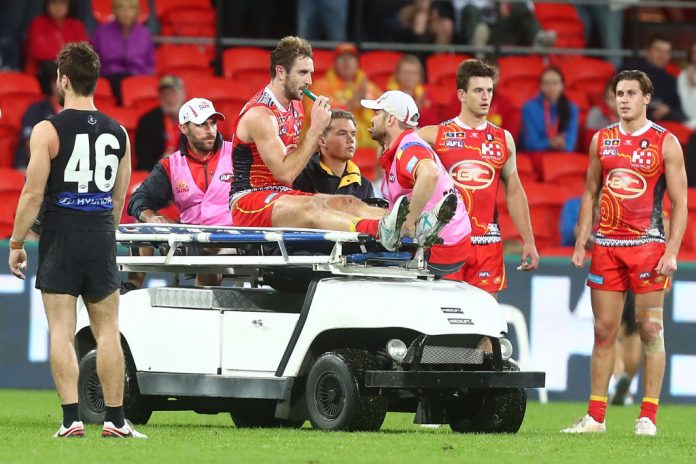 Michael Barlow’s surgery to repair his broken leg has been a success.

Barlow underwent surgery this morning after breaking his left fibula during the Suns’ narrow loss to Carlton at Metricon Stadium last night.

Suns football operations manager Marcus Ashcroft, said the injury is not as serious as the broken leg that derailed Barlow’s debut season for the Dockers in 2010 and he should return to training at the start of the club’s pre-season later this year.

“Scans last night revealed Michael had fractured his left fibula, but the good news from a medical perspective is that the surgery was a success,” Ashcroft said.

“We will now focus on ensuring Michael is pain free and make sure he gets through the next period of time.

“Michael is as positive as can be, at this early stage it’s believed he will resume running in approximately three months which means he will be up and running when pre-season gets underway.

“Unfortunately Michael has been down a similar path before, and even though the injury isn’t as severe this time, he knows what’s ahead and we will be with him every step of the way.

“The messages of support Michael continues to receive from throughout the industry is incredible and he’s very appreciative to all those who’ve been in touch.”

QUIZ: How many premierships has every club won?

The winners and losers from the 2021 AFL fixture