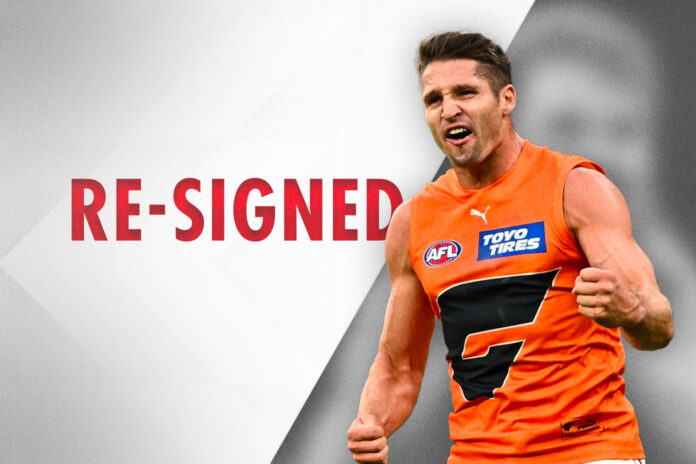 Jesse Hogan has signed a new two-year deal with the Giants, recommitting to the club until at least the end of 2024.

The 27-year-old has played 25 games in the orange and charcoal after making the move to the club following the 2020 season.

Hogan has enjoyed a successful 2022 after several injury interrupted years, playing 16 games so far this season. The forward is averaging 7 marks and 1.9 goals per game.

Having spent time at both Melbourne and Fremantle before eventually finding himself at Western Sydney, the key forward is excited to continue life at the Giants.

“It’s always nice to sign a contract, and to get a few years just shows the club has a bit of faith in me and shows where our relationship is at, so I’m very excited.

“I’ve touched on it a few times before, but the lifestyle just suits me a little bit better to where I’ve previously been and where I’m at in my career.

“The ability to get down to the beach and disconnect, and to not be such a footy-orientated state has been a really big factor for me on and off the field.

“I’m definitely feeling the most settled I’ve ever felt. It's the most games I’ve played in here and I think the more games you play in, the better you feel out on the field, the better your connection is to the game, the better you can work with your teammates – all of that.

“Being able to link together 15 or 16 games and still finish off the season has been massive for me.

“Also, I’m just getting a little bit older now so I like to think I’ve got a bit of a calmer head on me and can take a deep breath and relax a bit more.”

Hogan has played 115 total career games, kicking 220 goals. The talented forward will form part of GWS' squad today as they look to upset the Western Bulldogs at Marvel Stadium. The match is scheduled for 1:45pm AEST.