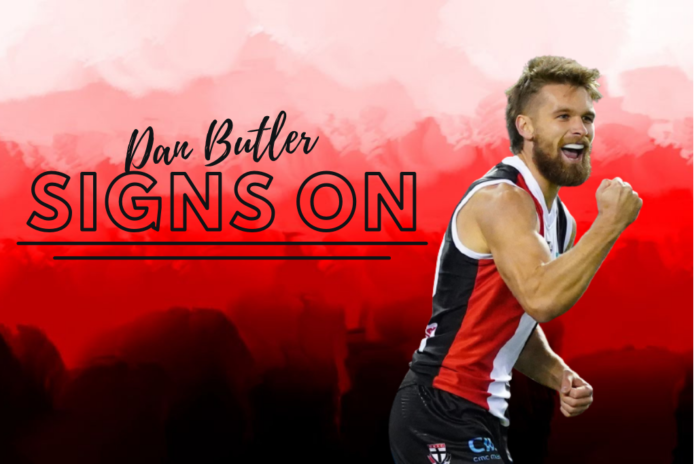 St Kilda announced the 24-year old’s new deal on Tuesday morning, tying him to the club until the end of the 2022 season.

Butler was excited to commit his future to the club and is confident they are moving in the right direction.

“I’m really happy to have signed on for another year,” Butler told saintsfc.com.au.

“We have a really great group of guys who are all committed to constantly growing and getting better.

“I’m optimistic about where we’re headed, and I’m stoked to be part of it.”

The exciting goalkicker moved from Richmond to St Kilda at the end of 2019 and was one of the boom recruits of the 2020 season.

He booted 29 goals in the COVID-shortened campaign, earning a place in the All-Australian squad and finishing second to Jack Steele in the Saints’ best and fairest.

Saints list boss James Gallagher praised Butler’s impact since crossing from Tigerland and said his signature was significant for the club.

“The influence that Dan has had since joining the club has been evident and it was always our intention to retain his services for 2022 and hopefully well beyond,” he said.

“Dan’s speed to create and also defend, as well as his uncanny goal sense, ensures that he is a very important member of our forward line, while his selfless approach to the game makes him a very popular teammate.”

Butler’s early-season form has mirrored St Kilda’s indifferent start to 2021, booting eight goals from seven games. However, he is coming off an equal season-high three-goal effort in last Saturday’s win over Hawthorn.

The 14th-placed Saints will be searching for their consecutive win when they face the Suns at Metricon Stadium this Saturday at 2.10pm AEST.