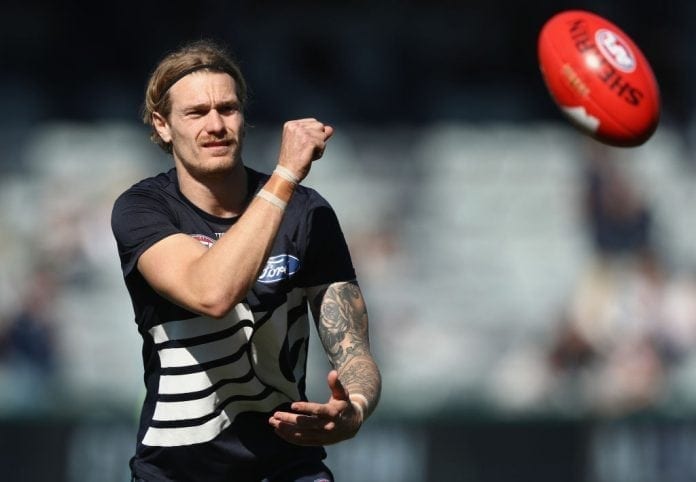 Geelong are facing a nervous wait on the diagnosis of defender Tom Stewart's foot injury, with AFL.com.au's Mitch Cleary stating the setback could be season ending.

Within the Cats' announcement that Stewart had been withdrawn from Saturday's clash against the Saints, Geelong football boss Simon Lloyd stated the club will seek the attention of specialists to examine the extent of the damage.

"Tommy Stewart sustained a foot injury in a marking contest at Thursday's training," he said.

"He's not available this week and we'll consult relevant specialists over the coming week."

According to Cleary's report, the Cats are concerned their two-time All-Australian may have sustained significant damage to his foot.

A Lisfranc injury could spell the end for Stewart's season, with the 28-year-old already placed in a moon boot and requiring crutches.

Stewart's availability holds massive implications for the Cats' premiership tilt, with the key defender in contention for the Carji Greeves Medal at season's end.

Geelong were aiming for a clean bill of health heading into the post-season, with Jeremy Cameron, Lachie Henderson and Mark O'Connor making returns for Saturday's clash with St Kilda at GMHBA Stadium.

Quartet Gary Rohan, Mitch Duncan, Zach Tuohy and Gryan Miers could be in line for returns come finals, with their comebacks also hinging on the AFL's decision to potentially scrap the pre-finals bye.

Should the league bring the finals forward by a week, it could spell concern for Chris Scott's side given the expected timeframe of several injured figures.

Stewart was replaced by Sam Simpson for Geelong's clash with St Kilda.