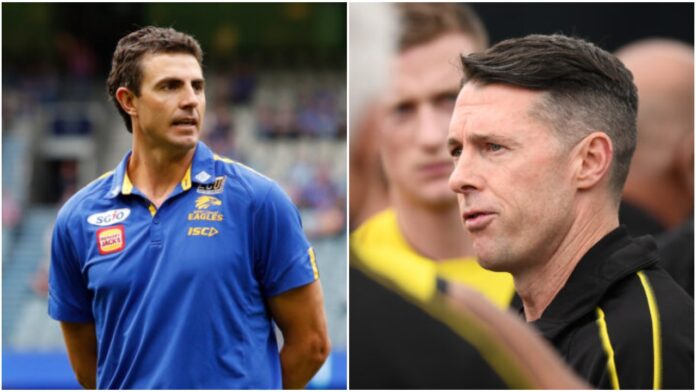 West Coast assistant Jaymie Graham is understood to be out of contention for the vacant Collingwood senior coaching job, placing Hawks assistant Craig McRae as the favourite to succeed Nathan Buckley at the Holden Centre.

As reported by The Age, Graham has been notified that he would not be handed the Magpies' senior coaching role, further narrowing the race.

Graham was understood to be in contention for the recently vacant North Melbourne senior coaching position after Rhyce Shaw's departure from Arden Street, with David Noble eventually getting the nod.

Along with McRae, Tigers assistant Adam Kingsley and former Brisbane senior coach Michael Voss firm as other coaches in the running, with the likes of Don Pyke, Alastair Clarkson, Ross Lyon and Mark Williams joining Graham in being out of contention.

McRae, who joined Hawthorn ahead of this season, was a key member of the Tigers' hierarchy in their recent dominance, leading the club's VFL side to a premiership in 2019.

A member of the Lions' historic three-peat in the early 2000's, McRae recently received a glowing recommendation from coaching great Leigh Matthews.

“He’s done his 15 years behind the scenes,” Matthews told Sportsday.

“He’s done his yards behind the scenes at Richmond and Hawthorn more recently.

“I think 'Fly' is a coach of the modern era in his general personality.”

Now seen as a the front-runner to lead arguably the biggest club in the league, McRae is tipped to take that next big step.

The Magpies have faced some delays in looking to appoint their next senior coach, with COVID-19-related challenges handing their hunt some challenges to interview candidates.

With their 2021 campaign now over, Collingwood are tipped to announce their new coach within the next month.