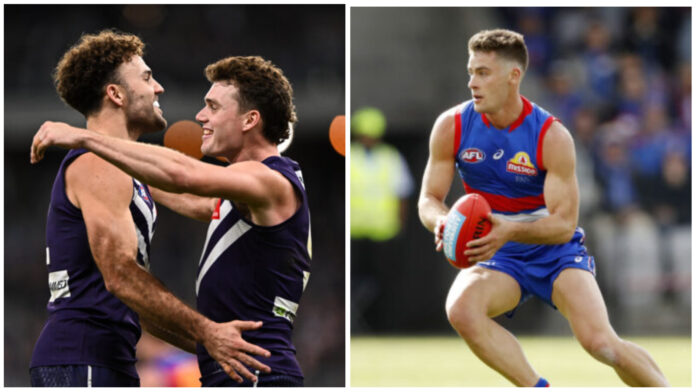 It's already been a huge off-season for Essendon and it's going to get even bigger with a $3 million budget ready to be splashed.

The Herald Sun has reported that due to recent retirements and exits over the last three years - and not one player being on over $800,000 per year - the club has a $3 million budget to spend on the trade period and free agency window.

In the last two years, the Bombers have lost Orazio Fantasia, Adam Saad and Joe Daniher, which is now being followed by Anthony McDonald-Tipungwuti and Devon Smith.

In that period, the only player they have brought to the club through free agency is Jake Kelly during last year's window.

With a budget this large, and the potential for more exits, Essendon have the potential to have one of the biggest off-seasons we have seen, with plenty of quality possibly becoming available to them.

With the retirement of McDonald-Tipungwuti, a small forward is a must for Essendon to bring in, and there are a few names that can definitely play an important role in the Bombers' forward line.

The Bombers sent an $800,000 per season contract Izak Rankine's way but it was swiftly rejected as he looks destined for a move to the Adelaide Crows.

Toby Bedford is a name that has been thrown around a lot, with the 22-year-old struggling to get regular game time at the reigning premiers.

Bedford possesses a lot of qualities that Mcdonald-Tipungwuti had, which includes pace and pressure as well as an eye for goal. He will be available to the Dons if he does not sign a new contract with Melbourne.

James Rowe is another name that comes into the conversation, having already been linked with a move to the Bulldogs, Essendon may consider him an option if necessary.

Bobby Hill is the another small-forward looking to be available to clubs, but Collingwood are in the box seat for his signature.

With Dyson Heppell possibly on the way out, the Bombers could also possibly look at former player Conor McKenna to replace him as the Irishman is reportedly returning to the AFL in 2023.

McKenna was a key player for the Bombers during the 2018 and 2019 seasons but departed at the end of 2020 to return to Ireland.

A wingman could also be on the watchlist for the Bombers, and there are a few big names up for grabs.

Brad Hill could be a target, but his reported $900,000 wage would be a massive turnoff for the club.

A more suitable option for the club would be Fremantle's Blake Acres, who may be on the way out. Acres has had a terrific season for the Dockers and Essendon would only have to pay around $300,000-400,000 per season for him, less than half of Hill's wage.

A big name key-forward could also be on the radar, and the two names that could pop up would be Harry McKay or Ben King.

Clubs have been circling around Ben King ever since he was drafted to the Gold Coast, and the two clubs that keep popping up are the Saint and Essendon.

McKay is a little more farfetched but not out of the question, and with only a year left on his contract with intentions unclear the Bombers could be open to a surprise move for the Coleman Medal winner.

Dunkley is yet to sign a new contract and is out of contract at the end of the year. He would be a huge name for the Bombers to land but would come at a hefty price.