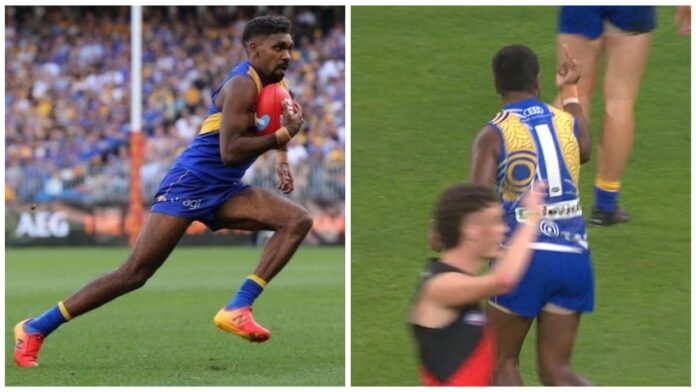 Following a fracas with Bombers defender Mason Redman, Ryan was caught on the live broadcast 'flipping the bird'.

While it is unknown who Ryan was directing the gesture towards, the Eagles high-flyer could face a fine for his actions.

Liam Ryan gesturing one of the lines in West Coast’s song. We’re the big birds. pic.twitter.com/F3guBjuelH

Richmond superstar Dustin Martin was fined $7,500 - $5,000 of which was suspended - for making abusive gestures towards Greater Western Sydney players in April, 2019.

Martin apologised for his actions via Social Media after the fine, stating he was frustrated at the time.

"Frustrating one on the weekend !! I understand my reaction is not a good look for the game.. I apologise for my actions . Thanks," Martin tweeted.

Speaking after the Eagles' 16-point loss to the Bombers, Fox Sports' Jon Ralph said the AFL could be ready to hand Ryan a hefty fine.

The incident follows a forgetful evening for the Eagles, who gave up a 29-point lead to loss their first home game of the season.

West Coast will be sweating on the results of star midfielder Tim Kelly, who was subbed out of the match with a knee injury.

“Kelly has got a medial (knee ligament injury), Oscar has concussion.”

Gun forward Oscar Allen also had his night ended early due to concussion and will miss next week's clash with Carlton through the league's concussion protocols.