Eight rounds down and fans are already having trouble predicting weekly winners and which team will end up where come season’s end. 11 teams are currently sitting on or in between 16 and 20 points on the ladder. The unpredictability of each game is beginning to frustrate some fans.

Fortunately, you don’t have to spend any more of your time racking your brain trying to figure out who’s going to end the season on top. Champion Data has taken a look at the statistics and have come up with the most possible outcomes regarding positioning on the AFL ladder.

As many fans would expect, Richmond are the most likely to end up atop the standings this season with a whopping 28% chance to keep their top spot according to the stats. The Crows come in second with a 15% chance to end up on top.

Surprisingly, the Eagles who currently sit second on the ladder are predicted to drop out of the top four by round 23 with only a 47% chance to earn a double chance spot. However, it does come with a 16% increase from their chances last week, the highest number amongst all teams.

The biggest turnaround that Champion Data is predicting is for the Sydney Swans, who, according to the stats, will jump four spots from 7th to 3rd. Unfortunately for Lions fans and Carlton fans the bottom of the ladder doesn’t look like it’s going to go through changes.

Both squads have only a 1% chance of making the top 8 and Brisbane have a nearly 50%  chance of taking the wooden spoon. Carlton come in 2nd with a 27% chance and the next team up is St Kilda who have a low 11% possibility.

Arguably the biggest surprise is that the Essendon Bombers, who many regarded as a powerhouse at the star of the league now have a 2% chance of making the top eight.

According to the data, the top eight will include only three Victorian teams in the finals, as well as the two South Australian teams, the two sides from Sydney and only one from Western Australia. 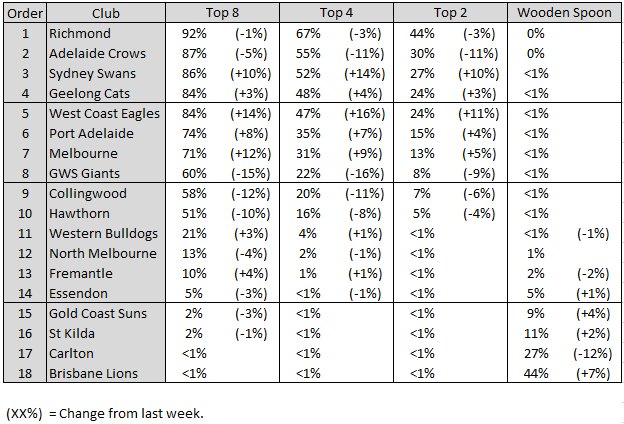