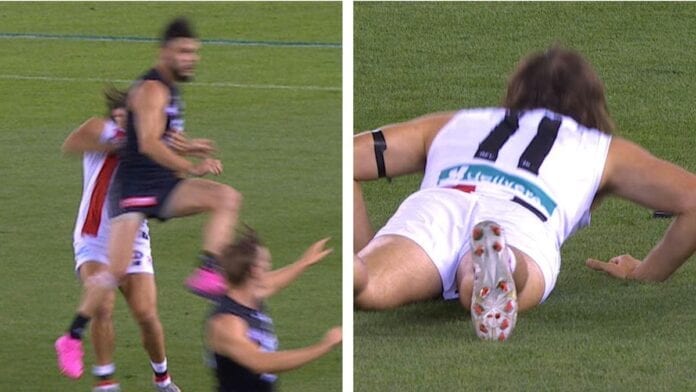 The new Blue will miss round one after his hit on Saint Hunter Clark in the opening seconds of Carlton's AAMI Community Series match was deemed as high contact and medium impact.

Carlton contested the charge on Tuesday in a bid to get the hit downgraded to low impact but were unsuccessful.

Speaking on AFL 360 on Tuesday night, Maclure said it simply wasn't good enough for a player who has come in on such a big money deal.

“I thought it was ordinary … he copped his right whack and he’ll get a week and he’ll move on," Maclure said.

“I’m not happy that he’s come to this football club that I was at and all of a sudden he’s out not playing the first round. I reckon that’s pathetic for mine.

“I think they should fine him … and say: ‘Hey mate, we brought you here to play. We didn’t bring you here to not play."

Speaking on Sportsday, Gerard Healy said the Blues wasted their time with challenging the charge.

“You have to ask yourself, is it money well spent? It’s hard to believe given the climate we’re in with concussion that he gets off.

“So 50 x $200 membership’s money gets ripped up. I wouldn’t have appealed, but I guess if you don’t go you never ever know.

“If there was any environment upon which I think he would get off, it’s not this one.”

The main conjecture around the suspension is that it does go against some precedent set over the last few seasons.

But with everything the league is learning about concussions and the impact they can have on players post-football this suspension may be a move in the right direction.

Clark underwent a concussions test post-game which he passed, but the test was mandatory.