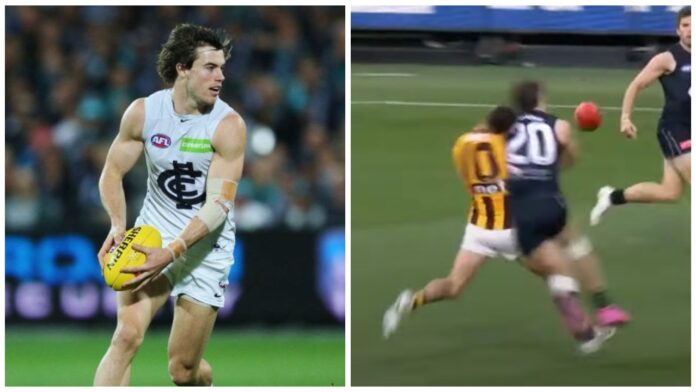 A decision was made after more than two hours, with the Tribunal deliberating for a prolonged period before coming to a decision.

Plowman collided with Hawks star Jaeger O'Meara during Saturday's clash between the Blues and Hawks at the MCG.

Plowman will now miss games against Sydney and West Coast as he serves the ban.

However, Plowman's representatives are understood to have requested a reprimand or suspended sentence to one week given the defender's past good behaviour, per AFL Media.

Huge contest that from Plow late in the game! pic.twitter.com/Eh4RS5mSxr

O'Meara was left concussed from the incident and has since been ruled out of his side's Round 11 clash with Gold Coast.

Gold Coast utility Nick Holman has had his appeal against a two-game ban for a dangerous tackle successfully overturned, with the AFL Tribunal finding the Suns utility not guilty.

Holman was charged by the MRO for his tackle on Geelong star Mitch Duncan, which left the Cats midfielder concussed.

The tribunal has dismissed his charge, deeming the tackle legal.

This is ridiculous! A chase down tackle and Nick Holman @GoldCoastSUNS is suspended for 2 weeks. What’s the game coming to?! @AFL pic.twitter.com/7vOe7mER3n

The charge received widened backlash as it was seen by many as a routine chase-down tackle, with Holman even being rewarded a free-kick as Duncan was penalised for 'holding the ball'.

Holman and his representatives argued that the tackle on Duncan was not careless and that it was within the rules of the game, per AFL Media.

AFL's Jeff Gleeson: "This starts off as a terrific tackle ... but he succeeds in, pinning the right arm of Mr Duncan."

He says there was a "second driving action" after Duncan kicked, and Holman's duty was to not "exacerbate the impact" once he knew the kick was ineffective.

Holman will now be free to play in his side's clash against Hawthorn at TIO Stadium, Northern Territory on Saturday night.

Richmond midfielder Marlion Pickett has failed in his appeal for striking, with the 29-year-old's one-game suspension upheld.

Pickett was reported for striking in Friday's loss to Brisbane for his hit on Lions defender Brandon Starcevich.

Pickett and his representatives were seeking to have the adjudicated level of impact of the strike downgraded from medium impact to low.

Starcevich did not require any medical assistance following the incident and was able to play out the match.

The Richmond speedster will now miss his side's clash with Adelaide at the MCG this Sunday.