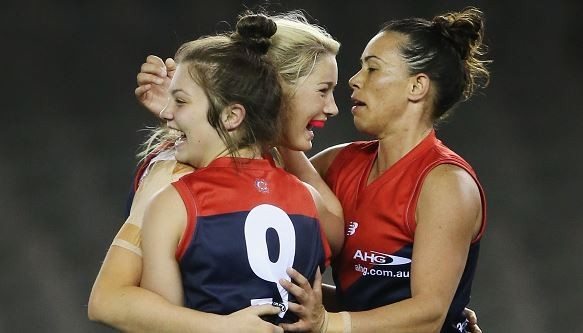 Women’s football has received another boost with the establishment of a Victorian state league competition aligned with the VFL for the 2016 season.

The yet-to-be-named competition will be aligned with the existing men’s state league, which will expose the VFL’s fan base to women’s football and encourage the growth of its audience.

“This will be the first step in establishing a professional women’s state league competition in Victoria, but it will take time to mirror all aspects of the men’s league,” AFL Victoria CEO Steven Reaper said.

“With the AFL national women’s competition on the horizon, we need to provide the best standard competition for these players, and a dedicated state league for women will help set that benchmark, providing a much needed next step in the female talent pathway.

“[A total of] 73 of the 109 players invited to the new AFL Victoria Women’s Football Academy that started last Sunday are from the 10 proposed state league teams, highlighting the depth of talent that will be on show.”

The AFL has plans to establish a national women’s competition from 2017 onwards.

It comes on the back of the recent success of the exhibition matches staged between Melbourne and the Western Bulldogs; the second of which this season was the first to be televised.