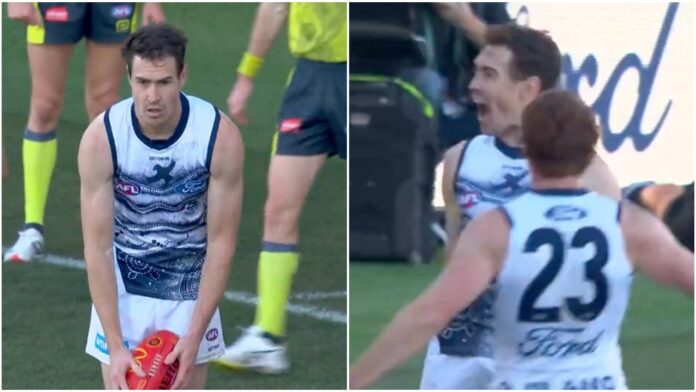 Geelong forward Jeremy Cameron gave his side a lift heading into the final break against Port Adelaide on Saturday, launching a barrel from 55 metres out to boot his second goal of the game after the three-quarter time siren.

Cameron lined up for goal 60 metres out from goal as the siren sounded, with the former Giant opting to back his abilities with a torpedo attempt.

The left-footed strike was sweetly hit, sailing through the big sticks to give Geelong a 26-point lead heading into the final stanza.

Cameron's goal capped off a strong third term for Chris Scott's side, having clawed themselves back in front after trailing at the main break by one point.

The goal also matched the effort of teammate Mitch Duncan from last year when the midfielder slotted home a stunning torpedo against the Eagles at the other end of Kardinia Park.

A win over the Power will see Geelong strengthen their finals bid and return to winning ways, having claimed just one win in the past three weeks.