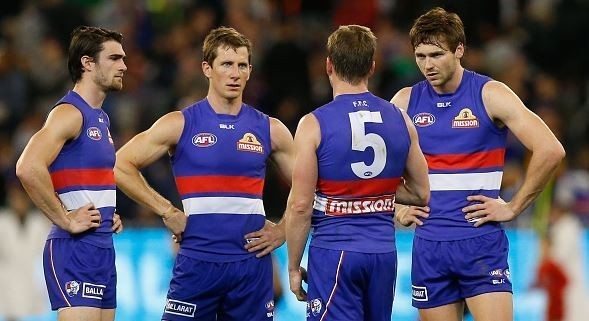 With the season over, it’s time to start reflecting on 2015 and assessing how the off-season must be attacked.

Here is part five of our series of the major question confronting each team ahead of next season. Today we look at Richmond, Sydney, West Coast and the Western Bulldogs.

RICHMOND TIGERS: What is the answer to this unfunny joke?

As asserted in the subtitle, The Tigers’ failure to win a final has become somewhat of a punch line, especially for their supporters.

Three elimination final losses in a row, no finals victories since 2001 and something has got to give at Tigerland. Just what it is though?

Fingers have been pointed at coach Damian Hardwick, captain Trent Cotchin and the playing group as a whole and rightfully so, given the nature of their three finals losses.

With the departure of veterans Nathan Foley, Ricky Petterd, Chris Knights and former captain Chris Newman, the road is only going to get rougher for a Tigers team that seems to, without fail, crumble under pressure annually in September.

Given his history with the team, Damian Hardwick is unlikely to get the axe – although maybe he should. He has been lucky in the past few years to keep his job and Richmonds’ show of faith in him means he is in it for the long haul.

With that in mind, one looks to the list for answers to the problem. 592 games of experience will depart Punt road this year and they will not be replaced easily.

The Tigers have been linked to a fair few names this off-season, most prominently speedster Chris Yarran, but they will need to do far better than just him to solve such obvious issues at the club.

If all else fails, could we potentially see Richmond darling Trent Cotchin dethroned of his captaincy in favour of Brett Deledio or Jack Riewoldt? Unlikely, but desperate times can do funny things to a club.

SYDNEY SWANS: How can they set their premiership clock forwards again?

Admittedly, there were a few asterisks surrounding Sydney’s loss to North Melbourne in the semi-finals this year, due to several key outs.

Nevertheless, they lost a home final to a team from the bottom half of the eight, and for a team with so such experience and class, that is inexcusable.

That very game also proved to be the end of the divisive career of Adam Goodes, signaling to the Swans that the times, they are a-changing.

Their most glaring weakness is in the ruck department, which Sydney have so far attempted to address by bringing in either Callum Sinclair from West Coast or Matthew Leuenberger from Brisbane.

Neither fills the behemoth void left by Shane Mumford a few years ago, but with the trade period restrictions placed on the team, they have few other options.

The departures of both Goodes and Lewis Jetta will open up some spots in the team for youngsters such as Tom Mitchell and James Rose, which is exactly what the club needs.

If they can bring back a second or third round draft pick in return for the out-of-favour Craig Bird they will be able to lock down their academy talent, which has so far proven to be successful.

While the Swans have taken a step back in the past few years, with a revered playing roster and with All-Australian talent all over the park, both young and old, there is little need to fear.

WEST COAST EAGLES: They’re just a player or two away – but who are they?

This season, West Coast came so agonisingly close to their four premiership flag, but inexperience cost them on Grand Final day.

Still, it seems that the Eagles are only a player or two away from bringing another premiership cup west – but who are they looking for?

Both Jack Redden and Lewis Jetta have requested trades to the club – almost a dream scenario for the Eagles. They will likely lose some young talent and draft picks for both, but that is little to worry about.

Jetta brings speed to the midfield, while Redden brings across the ability to win his own ball – both fantastic, contrasting qualities every successful footy team needs.

Considering some of the key backs sitting on the sidelines this season – Eric McKenzie, Mitch Brown for starters – the Weagles will beef up their backline next season without expending any cap.

If they can keep everyone healthy for next year, there are no more excuses as to why they can’t win it. Watch this space.

WESTERN BULLDOGS: How far is the list from finished?

A year ago, the Western Bulldogs looked like a rabble. They had just lost their captain, their coach and just brought in an untested talent on a one-million dollar a year contract.

In the words of Mark Robinson, they looked “finished”.

A year later, they’re playing finals and looking like one of the best young teams in the comp.

But let’s skip all the romance and get straight to the point – how far is this list from finished? What else do they need?

The Dogs have signaled that they may be active in the trade market, already signing Matt Suckling from Hawthorn and putting themselves in the race for backman Jake Carlisle. They seem keen to go down the path of experience, and if so, they should also consider taking a look at Essendon’s Brent Stanton and even de-listed Cat Steve Johnson, who appears keen to continue his career elsewhere.

Experienced additions such as these will be vital to making sure the Bulldogs keep the pivotal balance of experience and youth that is so vital to winning a premiership, as we saw this year with the Hawks.

Can the Doggies rise up the ladder again in 2016? Have your say in the comments section below.