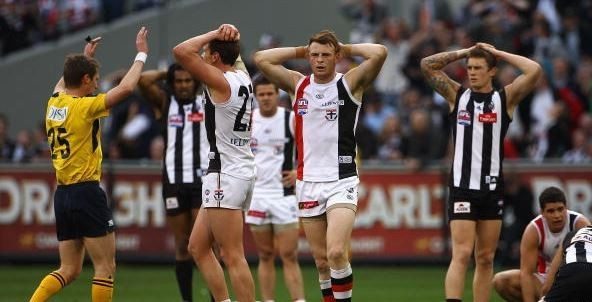 With 13 different grand finalists over the last decade and a half, no two Grand Finals have been alike. While not all have been close, all have certainly been fascinating for one reason or another.

To celebrate the lead-up to Saturday’s Grand Final, let’s take a look at the five best deciders of the past 15 years.

In the closest Grand Final for 40 years, Sydney looked like they were going to snatch it from West Coast for the second year running, after making up a five goal first-quarter deficit.

In one of the most intense fourth quarters in Grand Final history, West Coast was able to keep Sydney at bay by matching them goal-for-goal and eventually just hanging on by the slimmest of margins to avenge their loss the previous year.

Another classic Grand Final involving the Swans, this one may not have been as close as 2006, but had a final quarter with just as much, if not more drama.

The game had been even all day, with each team dominating play for different periods of time and when risks were there to be taken and the match was there to be won, the Bloods kicked two huge goals late in the last quarter to snatch the game from the more fancied Hawthorn side.

At the end of four quarters of utter heroism and desperation from the Magpies and Saints, the final match of the year ended with scores locked at 68 a piece, for only the third Grand Final draw in VFL/AFL history.

While Collingwood responded the far better of the two and won the replay a week later by 10 goals, it is the first match that will not only go down as one of the great Grand Finals of the modern era, but of all time.

In one of the toughest and closest Grand Finals of all time, the combined total of 214 tackles is the second most in any game in the history of the competition.

The intensity, desperation, desire and absolute refusal to lose brought to the table by both teams was incredible, with casualties on both sides, including St Kilda star Brendon Goddard playing on despite a broken nose and collarbone.

In the end, Geelong executed when they needed to in a finale that warriors of the famous ’89 Grand Final would have been proud of.

There has been a lot of debate over whether the original or the sequel is better. However, for me, it’s the unforgettable moment in football history that the ’05 playoff gave us that sees it get the nod.

Whilst it may not be the most aesthetically pleasing match on this list, the final few minutes of the match are some of the greatest in Grand Final history, culminating in Leo Barry’s unforgettable match winning mark that has been and will continue to be replayed over and over again for years to come.

The rest is history.