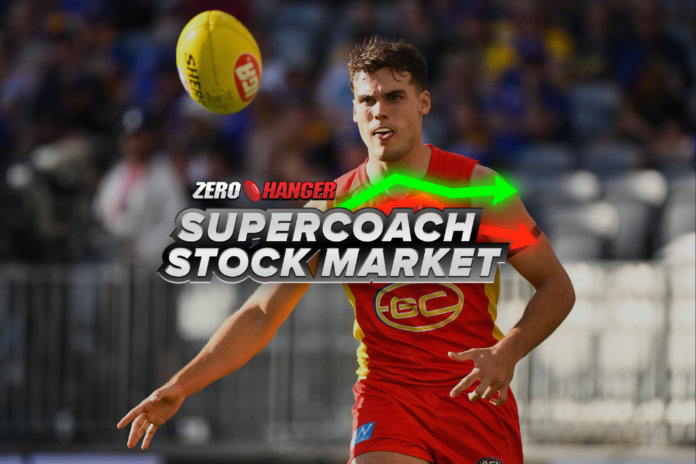 Looks the real deal. Disposal efficiency and reliance on kick-ins have been key for his hot start to the year, where he now sits second in scoring for defenders behind Jordan Ridley.

Just cracked the $500k barrier so he still remains a cheaper option should Ridley be out of your reach.

Ownership of 4.7% is mouth-watering considering his season average.

Many will look to Steele or Guthrie as their go-to midfield premium option, but Parker firms as a cheaper option that is a proven scorer against the top sides.

Past three rounds of 104, 120 and 151 have placed his breakeven at an enticing 68 with Greater Western Sydney, Gold Coast and Geelong to come next.

Should you feel uninspired by the idea of nabbing Bowes, the Port Adelaide defender firms as a formidable option after an impressive start, averaging 112.3 from the opening month.

Like Bowes, small ownership % could make Houston a handy POD.

Was tipped as a sure thing for SuperCoaches pre-season and looked to have delivered on that prediction after a 128.5 average after the opening fortnight.

Has found it tough since with scores of 66 and 48 but you can assume the worst part of his season is behind him.

Faces the Crows and Kangaroos in next two weeks in what is likely to be a bumper few rounds for the Dockers star.

This one is circumstantial to say the least.

Should you be able to upgrade a rookie and add a premium as cover to your defense, then rest Daniel for the weekend on your bench given his suspension and potentially use him as a loophole option.

If your hands are tied for a donut, move him on. The aforementioned Bowes and Houston options will only hurt your pocket a little.

Hasn't been amazing but shouldn't be in your trade plans, yet.

Possesses a very gettable breakeven of 47 as he comes up against his former side this weekend, where he is destined to put on a show.

Look to use your trades elsewhere and bank whatever he makes this weekend before moving him on.

Thankfully for those that brought in the Power young gun his first-half efforts were enough to keep his price afloat with a $12.4k rise.

Butters will miss the next month, which is a timeframe too long to hold at this point in the season.

Zak Butters has suffered ankle syndesmosis with a best case timeline of 4-6 weeks....

Butters' DPP status also allows you to swing him into the midfield if need-be.

Facing a similar timeline to Butters, and with a $50k cheaper price tag, Heeney leaves you with less obvious options.

Taylor Walker's price will continue to rise and the Adelaide forward might just end up as a top six selection come season's end given his unstoppable start.

Coaches would have held him through last weekend but latest injury updates rule him out for another month.

Adam Cerra the obvious trade option as he'll bank you some cash and looks to be in fine form with an average of 104.5.

A small fee can get you the in-form Jack Billings (average of 106) as a POD option, while $50k will land you Sam Walsh.

Alec Waterman firms as a must-get forward option, with a breakeven of -77, while his job security looks to be rising.

Should you have missed Heath Chapman's price rise last week, fear not. The Dockers defender is just a touch over $200k and has a stellar BE heading into Round 5.

Braeden Campbell's Breakeven of 71 shouldn't be too much of a concern as it remains a very gettable score for the Swans' MID/FWD hybrid. His Round 2 score of 118 is sure to drop out after this round, so he'll be a keeper for one more week unless he tons up against the Giants this weekend.

Waterman looks a must. Will be forced to move on Zak Butters, so could be left with $462,500 to use elsewhere if that's my first trade.

Will be waiting out for selection with Bergman and Sharp currently out of their sides. Bergman could come in after injuries to Butters and Duursma. Highmore still out hurts.

Jordon's BE of 47 is a tough call. But might hold for another week.

Daniel could the the one to go if defensive rookies aren't named.