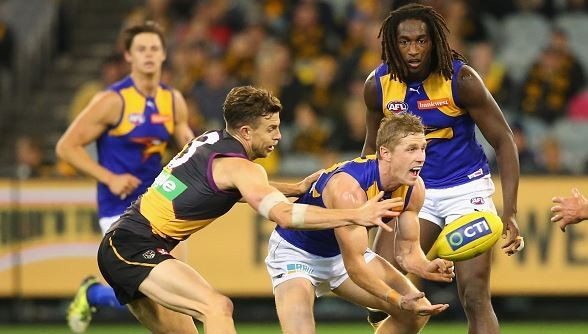 West Coast coach Adam Simpson says he is hopeful vice-captain Scott Selwood will remain at the club, despite reports linking the 25-year-old to Geelong.

Selwood, who will become a restricted free agent at season’s end, is yet to commit to a new deal at West Coast.

“He’s a best and fairest winner, he’s our vice-captain and he’s an important part of our side,” Coach Adam Simpson said.

“We’ve had conversations, but nothing too deep. To be honest it’s been more about form and his body.

“He’ll make that [contract] decision when he needs to, and I’ll let you know when he does.”

Selwood has struggled with injuries over the past two seasons, missing 10 games last year and missing six games earlier this season. The 2012 best and fairest winner has started as the sub three times this year, fuelling speculation that he may want to leave the club to join older brother Joel at Geelong.

“What we’ve been told is it’s going to take a good season to get back to full comfort, the way he recovers, prepares, training during the week, how many kicks he can have on it.

“So he’s been restricted a little bit and we’ve got to manage him through the season, but at the same time our midfield is performing pretty well, so a bit of both.”