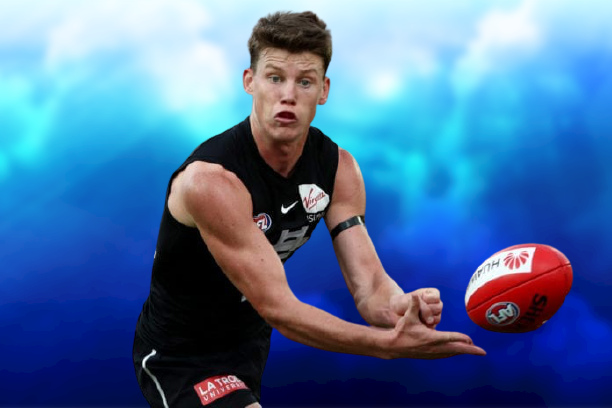 Patrick Cripps has carried the title for the Blues and the one-man army approach has seemingly taken a toll on the co-captain's body.

But Walsh has started the 2021 season in incredible form and has quickly become Carlton's best midfielder.

We're running out of words to describe this bloke, so we'll let his highlights do the talking. @samwalsh_18, everyone. ⭐️ pic.twitter.com/XH1i89WoTm

RELATED: Carlton’s next month to dictate McKay contract amid interest from rivals

The 2018 No. 1 draft pick was best on ground in his team's crucial win over Essendon on Sunday afternoon and proved again that he has taken his game to another level.

Walsh had 33 disposals and a goal to go with eight score involvements and eight clearances.

It was his work rate that was most impressive as he got himself to contest after contest and won his own footy when called upon.

Walsh has long been a target of Port Adelaide's games record holder Kane Cornes, who famously has said the Blues got that pick wrong.

However, Cornes has now held his hand up and admitted he was wrong.

“Ross Lyon asked me on Wednesday’s Footy Classified whether I would take anything back I’ve said in the media and I said I would have (my Walsh comments back). I absolutely would,” Cornes told SEN Breakfast.

“I’ve got a lot of respect for him and the way he plays and I’m disappointed that I was so hard on a young kid.

“He’s a lot tougher than I gave him credit for. He’s their best player now.

What separates Walsh from Cripps is the ball use and how damaging each of Walsh's possessions seem to be.

Cripps is still one of the best clearance and stoppage players in the game but when Walsh gets the ball in space he usually hits a target and that is a priceless commodity.

Walsh is going at 79 per cent disposal efficiency, which is priceless given Carlton's trouble with ball use, while Cripps is at 70 per cent and is averaging six less effective disposals per game.

Cripps also averages just under double the amount of clangers (5.9) as Walsh (3.3), who is starting to take the league by storm.

Walsh even leads Cripps in stoppage clearances - where Walsh averages four a game, while Cripps is just under 2.5 per game - an incredible result given Cripps' dominance around the stoppages in recent years.

Cornes believes it's time for clubs to start putting more time into Walsh than what they do Cripps.

“I’m waiting for a team to tag him. That would be the ultimate respect for him. Why does he never get tagged?

“He’s taggable because he’s a smaller midfielder. He’s not someone that’s going to go forward and expose you.

“No one’s done it yet and that will be the next evolution of his game. He’s a Brownlow Medal hope.”

Walsh is averaging over 30 disposals per game to start the season and is fifth in the league for total disposals.

Walsh is also averaging six clearances per game as well as just under five tackles a game. Only in Carlton's Round 5 loss to Port Adelaide has Walsh not accumulated 30 disposals (he had 29).

The Blues are now 3-4 with a tough fortnight ahead against the Bulldogs and Demons.