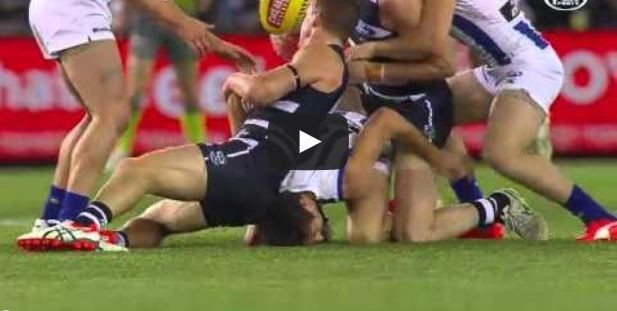 Scott said suggestions that Selwood’s tackle was similar to Chris Judd’s infamous chicken wing tackle against the Roos in 2012, in which the now retired Carlton champion received a four week ban, were “ridiculous.”

“No, I don’t personally (see anything wrong with the tackle), but I understand why people will look at it and say ‘gee that’s dangerous’,” Scott told SEN radio station on Monday morning.

“I don’t think it was anything like that. I think he pinned the arm and he held it. I’ve talked to Sam Wright about it specifically and he said ‘look, I have absolutely no issue with it’.

“People will form their own opinions, and try to make assumptions about what Joel was thinking, which I think’s unfair. On the evidence available, I don’t think anyone likes the look of a player having his arm pinned and pulled behind his back, but I don’t think that was Joel’s intention and Sam Wright certainly didn’t think it was his intention, either.”

The Geelong captain is expected to be sent straight to the tribunal.