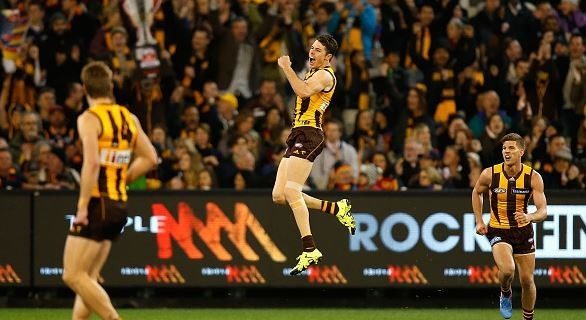 Despite, finishing top of the ladder, having a week off after a qualifying final win and playing at home, Freo start as underdogs with most of the book makers in this one. The pundits simply can’t go past the Hawks, who have won two flags in a row and have made the past three Grand Finals. It’s easy to dismiss Fremantle given that the Dockers have a defensive game plan and the fact that the Hawks have won seven of their past eight clashes, including a 72 point hiding in round 15 this season.

However, history suggests that that teams with the week off in finals tend to qualify for the big dance. The Dockers have plenty of motivation, having never won a flag since the club’s inception into the competition in 1995. Hawthorn beat Fremantle in the 2013 Grand Final which will also serve as extra motivation for Ross Lyon’s men. On top of that, there will be a 40,000+ strong purple haze army making Domain Stadium a cauldron for the home side.

The big question mark is over the Dockers’ ability to kick a winning score. Small forwards Michael Walters and Hayden Ballantyne will have to have big game, but more importantly, the Fremantle defence will have to be at its absolute best to stop the potent Hawthorn forward line. Even without Jack Gunston, Hawthorn has the likes of Roughead, Breust, Puopolo and Rioli.

However, with two trips to Perth in the space of three weeks and a hungry, rested Fremantle waiting for them, it might just be a mountain too high to climb for the Hawks. Having said that, it could go either way. If Hawthorn have proven anything over the past three years, it’s that they simply do not lie down. Make no mistake, this one will go down to the wire.

Hawthorn go into the match unchanged, while Fremantle has dropped Clancee Pearce and Zac Clarke and brought in Matt Taberner and Jonathon Griffin.

West Coast should win this one fairly comfortably. North has done a brilliant job of reaching the preliminary final two years in a row, from outside the top four on both occasions. However, the Eagles are red hot and it is extremely difficult to see the Roos causing a boil over here.

The Kangaroos were fantastic in the only meeting between the two teams this year, winning by 10 points at Blundstone arena. But at Domain Stadium with 40,000 roaring Eagles’ fans behind them, West Coast will be an intimidating force. Priddis and Masten return, while Selwood has suprisingly been omitted, as has Patrick McGinnity.

Both defensive line ups will be in be in for a big night, with Eagles’ forward pairing of Josh Kennedy and Jack Darling sure to cause the Roos’ defence plenty of headaches. West Coast has lacked height in defence all year with injuries to key backmen early in the season. Ben Brown, Jarrad Waite and Drew Petrie will be the difference if the Roos can get a win. But the Eagles’ midfield should be too strong, with West Coast building their 2015 success on a fast paced midfield that runs all day, both in attack and defence.