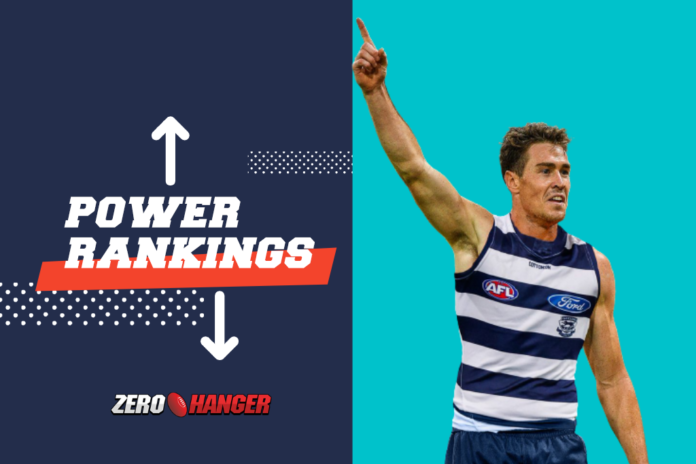 Round 14 was a shortened one, however it did not do anything in the way of hampering the quality of footy.

Whether it was the Cats incredible win at Kardinia Park after the siren or a Jake Stringer masterclass in Tasmania, this week of match-play saw excitement at every turn.

Therefore, let's see where each team sits heading into the home stretch.

The Dees had a week off following their disappointing Queen's Birthday loss to the Pies. Simon Goodwin will be hoping to get his side back on track against the Bombers this Saturday night back at the MCG.

In good news, vice-captain and hard nut Jack Viney is set to return following two months on the sideline with a toe injury which will only lift Melbourne's spirits.

The Cats had an incredible arm-wrestle with premiership rivals Western Bulldogs on Friday night, with a Gary Rohan goal after the siren sending the Geelong faithful into raptures.

SHOT AFTER THE SIREN

Tom Stewart had one of his best games yet with 27 disposals and equaling the record for most intercept marks in a match with ten. Sam Menegola was also instrumental with 27 disposals and two goals, whilst Joel Selwood finds himself in hot water after he was fined for ugly incidents against Taylor Duryea and Bailey Dale.

This incredible win means that the Cats now are on equal footing with the Dogs and have a real shot at securing a home final. Next week they go up against the Lions in another monster clash. Come away with the win in this one and they will be extremely hard to dislodge from the top four.

The Doggies were on the receiving end of the aforementioned kick after the siren - a true heartbreaker for Luke Beveridge's side. They looked as if it would be their night when Toby McLean slotted through a goal with five minutes to go but were cruelly denied at the death.

Marcus Bontempelli was the Dogs' best-on, with a 30-possession performance coupled with a goal being inspirational despite the defeat. Jack Macrae had 35 touches in what has become the norm for him, whilst Josh Bruce had a productive night with three majors including a Lance Franklin-esque goal in the last term.

50 out on the run on the wrong side for a left footer?

This week they face a tough test with a trip to Perth on the cards. Coupled with harsh quarantine restrictions, the Doggies will have to dig deep within themselves to come away with victory here.

Brisbane were pushed to the last by the Roos in Tasmania but held out to claim a 23-point win. In a see-sawing encounter, North hit the front in third term but ran out of steam as the Lions put the pedal to the metal.

Jarryd Lyons once again starred with 36 touches whilst Lachie Neale finished with 30 possessions and a goal. Zac Bailey showed his undoubted talent again with 29 touches and a goal to keep his team inside the top four.

Friday night is a huge match with big ramifications for the Lions' season should they lose as they welcome the Cats to the Gabba. If Chris Fagan's boys manage to win, then they will regain third spot from the Cats and keep in touch with the top two with a home final being integral to their premiership chances.

The Power had an easy win over the struggling Suns on the Gold Coast, getting over the line easily by 50 points.

Ollie Wines was incredible with 43 possessions and six tackles, whilst Steven Motlop has a fruitful day with two goals and 26 touches as well. It wasn't all sunshine and rainbows for Ken Hinkley's side however, with star Robbie Gray tearing a knee ligament and requiring surgery. Young gun Lachie Jones also did his hamstring with the 19-year-old set to miss over a month of footy.

Round 15 sees the Power welcome the Swans to Adelaide Oval, with a win here keeping Port in the race for top four despite having many key outs.

The Eagles had a week off following their huge win over the Tigers last Sunday night and face the Doggies on Sunday afternoon in Perth.

Skipper Luke Shuey is set to return this week as is speedster Jack Petruccelle and Brendon Ah Chee, strengthening their lineup and putting them in good stead to make a run at finals.

Richmond returned to Melbourne after a few weeks on the road, and will be keen to get their loss to West Coast far behind them as they go up against the Saints on Friday night at the MCG.

Thankfully for the Tigers, defender David Astbury and midfielder Dion Prestia will be back in the mix this week, with the side looking to replicate their last two seasons and put their foot to the floor in the second half of the year.

Sydney had their bye this week and would have appreciated the rest considering the tough match against the Power that lies ahead.

Will Hayward should be available after serving his 12-day concussion rest over the bye, whilst Chad Warner should be good to go following his leg injury barring any major problems.

The Bombers had a tough game against the Hawks but came out on top with a hard-fought win that keeps them somewhat in touch with the top eight.

It was all about Jake Stringer, with a huge performance in the form of four goals, 29 touches and seven tackles dragging his team over the line. Recruit Nick Hind had a great game with 25 disposals and a goal, so too did Zach Merrett as he racked up 27 possessions following the signing of a six-year contract extension.

The Don kicks his 4th🌟

A huge test awaits the Bombers at the MCG on Saturday night with a date with the Demons set to be a great match. Essendon will take confidence from their arch-rivals Collingwood with their win against Simon Goodwin's side showing that Melbourne are able to be beaten.

The Dockers had a weekend of rest this round and will travel to Melbourne for their match against the Pies on Saturday.

Nat Fyfe and Matt Taberner are possibilities for this match, with the club hoping they were able to recover well from their injuries over the bye.

The Giants had a great win, bouncing back from a disappointing draw against the Roos to beat the Blues in Sydney. Leon Cameron would have been pleased with his sides performance as they look to salvage something from their year.

Toby Greene dished up a typical 'Toby Greene' performance for the Giants, booting four goals, gathering up 20 touches and being reported for striking. Jeremy Finlayson had a huge night too with five majors as Jacob Hopper and Lachie Whitfield pulled all the strings in midfield.

GWS welcome the Hawks next week as they aim to keep in touch with the top eight and will be aiming not to stumble where their crosstown rivals Sydney did.

Adelaide had a week off following their thrilling victory over the Saints in Cairns and face the Blues in Melbourne on Sunday afternoon.

Defender Luke Brown is set to come back into the fray this week after recovering from an Achilles injury. A win against the low-flying Blues this week would give Matthew Nicks' side even more confidence going into the second half of the year.

The Pies will still be happy coming off their win over Melbourne and will be anticipating what lies ahead under Robert Harvey.

Fremantle are their next opponent and a win to start a new era would be exactly what Collingwood will want. Taylor Adams, Brodie Grundy and Brayden Sier come back into the lineup this week and should help chalk up some wins for the Pies.

The Blues were disappointing once again with David Teague's side slumping to 4-9 with a six-goal loss to the Giants. It wasn't for a lack of trying, with Carlton kicking four straight goals late in the third to bring it to 12 points but faded late on to give the win to GWS.

Matt Kennedy had the most touches for his side with 27, whilst Patrick Cripps (24 touches, five tackles) and Harry McKay (three goals) were also the best for the losing side. It was the lack of pressure from the Blues however that really sealed their fate, being smacked in the tackle count 79-41.

It's hard to see much positivity at Carlton at the minute, with all angles of the club being heavily scrutinised by many figures in the footballing world. This week they play Adelaide at home, with a win here being what is needed to get some confidence back.

Brett Ratten and co. had a rest this week as they prepare to take on the Tigers on Friday night. A win here could be massive for their confidence, but all signs are pointing to a feeding frenzy for the Tigers.

The injury list at the Saints is pretty extensive, so to get back Rowan Marshall, Shaun McKernan and Dan McKenzie and perhaps James Frawley could be massive for them as they will need all the help they can get.

The Hawks pushed the Bombers and if not for some Jake Stringer brilliance might have gotten the win in Tasmania. Alastair Clarkson's side had their noses in front early in the last, but ended up falling to a 13-point loss.

Tom Mitchell was the Hawks' best, with 36 touches and a goal to his name whilst midfield partner Jaegar O'Meara also had a productive day with 31 disposals. Forwards Luke Breust and Jacob Koschitzke booted three majors apiece but could not do enough to get their side over the line for a second upset win in a row.

The Hawks aren't looking bad at all going into the last two months of the season and have another chance this week to upset the apple cart of another finals hopeful. Leon Cameron's Giants will provide a stern challenge and it will be interesting to see how the Hawks go with Mitch Lewis and Ned Reeves set to return.

Things aren't looking rosy at the Suns with another miserable loss to the Power compounding their woes. Only managing four goals for the entire match, Gold Coast now have some serious soul searching to do.

Touk Miller was one of the only standouts with 31 touches and nine tackles on the day, whilst Noah Anderson (30 touches) and Jack Lukosius (22 disposals) were both solid in their own rights.

It's hard to see where the Suns go from here with Stuart Dew's job now under the microscope. This week they take on the Roos and will be looking to get the four points in what is a very winnable game.

North were admirable in their game against the Lions, pulling up short in the last term after hitting the front twice throughout the match. It seems that with each passing week they're getting better, even if it is by a small amount, and Roos fans should be hopeful for the future.

Jack Ziebell continued his outstanding year with 32 touches down back, whilst Ben Cunnington had a blinder with 25 disposals and ten tackles. It was down to Nick Larkey and Cam Zurhaar to get the majority of goals for David Noble's side, with the forwards booting three and two majors respectively.

This week is set to be one of the few chances that North Melbourne have to get a win against a somewhat evenly matched team. They welcome the Suns to Tasmania and with Stuart Dew's side against the ropes, could get their second win of the year.