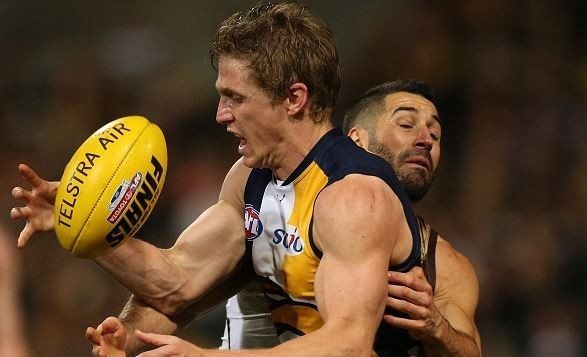 With free agency almost upon us again, take a look at where the free agents could play their football next year.

Check out all the 2015 trade, free agency and draft dates here

It seems almost inevitable that Fremantle will lock away all their required players for next year and another of those is defender Paul Duffield.

Another who is approaching the end of his career, Duffield looks set to retire in purple, with The West Australian this week raising the possibility that he could potentially call it quits in the coming weeks.

Dawson Simpson has struggled to lock down a regular senior spot during his career at Geelong, managing just 28 games in eight years at the Cattery.

The ruckman may have some use next year at Kardinia Park, with Hamish McIntosh calling it quits, but don’t be surprised to see him at a different club next year.

Matthew Stokes has been mum on whether he will play on next year or not. The 30 year-old said he felt he had some good footy left in him, but was not sure if he wanted to go through moving clubs.

If he was to continue however, it would only be with a team needing an experienced goal sneak, such as Richmond or Greater Western Sydney.

Matt Suckling is an unrestricted free agent, and has received interest from several clubs around the league.

The long kicking utility is an interesting piece for any club looking to make a run at the flag and being a New South Welshman, could receive some interest from both GWS and Sydney. Brisbane has also shown interested in the Hawk. If the money is right, he could very well make the move.

Brendan Whitecross is another unrestricted Hawk who could move on next year.

Having only played four games this season, the luckless defender is likely to move on from Waverley Park. With Brisbane having lost a few key position players this year, Whitecross could be a worthwhile addition to the squad.

Melbourne has offered Colin Garland a contract extension, but at 27-years-old, the key defender could look to move to greener pastures.

He is a restricted free agent, so the Demons could match any offer, but industry sources suggest he could command around $500,000 on the open market, which they may not wish to match. Essendon is a possible new home for Garland.

He has played 253 games for North Melbourne and Firrito has all but confirmed he will play on with the Kangaroos next year.

Following an impressive finals campaign, North have told him that his services will be required next year. The two parties just need to agree on the finer details of the deal.

Patrick McGinnity can be expected to re-sign with West Coast, with the medium defender being required at the Eagles for the next few years, but don’t be surprised to see him attract some interest from rival clubs.

Potential suitors could include North Melbourne and Port Adelaide. Both teams were in the wrong half of points against this season and could use some extra man power down back.

There has been a lot noise regarding Scott Selwood potentially joining his brother Joel at Geelong next year.

The youngest Selwood brother has struggled for game time at West Coast this season and looks likely to join Geelong.

Key position prospect Jarrad Grant knocked back an offer from Brisbane when he signed his last contract, but has announced he will be looking to exercise his right to leave this time around.

Considering their list, the Lions may want to take a look again. Other teams that could use the tall could be Carlton and Gold Coast.