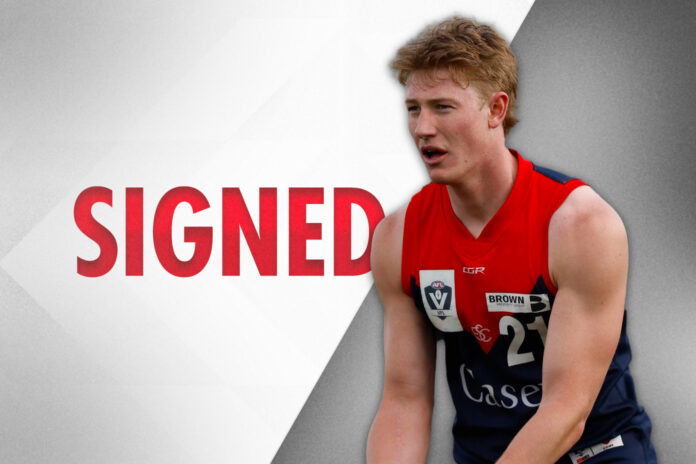 Melbourne have announced emerging forward Jacob van Rooyen has inked a new contract extension with the club, signing on until the end of the 2025 season.

The talented Western Australian joined the Demons as their opening selection at last year's National Draft, falling at Pick 19 from Claremont.

While van Rooyen didn't manage a debut in his maiden season with Melbourne, the teenager was a prolific force for the club's VFL outfit, booting 36 goals to play a key part in Casey's premiership campaign.

Likely to gain greater opportunities at AFL level next year in the absence of departed key-position youngster Luke Jackson, van Rooyen firms as an integral piece of Simon Goodwin's planning for the future.

In a move to lock away the 19-year-old, the Demons and van Rooyen have agreed to a new deal, a move that has buoyed Demons list manager Tim Lamb.

“Jacob has put in a mountain of work since arriving at the club, which is a testament to what he's been able to achieve,” Lamb told Melbourne Media.

“To have Jacob in the red and blue for at least another three years is exciting, and we very much look forward to what he can add to our team at AFL level, when an opportunity presents itself.

“Jacob is an exceptional young talent and we are excited to watch him continue to grow over the coming seasons.”

van Rooyen is among an exciting wave of developing talent at the Demons, with the likes of Kysaiah Pickett, Jake Bowey, Trent Rivers and uncapped duo Bailey Laurie and Blake Howes all set to compete in the years to come.

The signature of van Rooyen adds to a stellar year of re-signings at the Demons, with Clayton Oliver, Angus Brayshaw and Bayley Fritsch among those to have recommitted to the club.