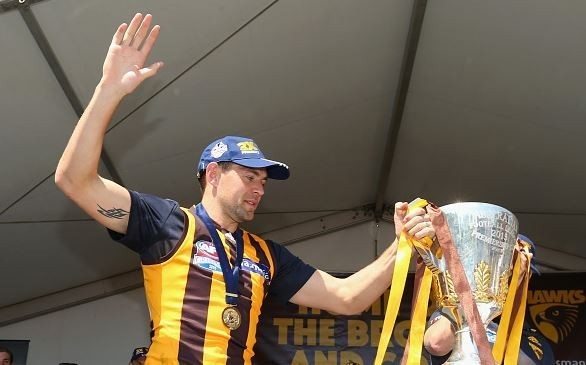 Former Hawthorn premiership player Brent Guerra has revealed that Luke Hodge lost a bet during this year’s premiership celebrations, resulting in the Hawks’ skipper getting a double spray tan.

Guerra said that Hodge and Grant Birchall visited him on the Sunday after the Grand Final to have a few drinks and celebrate the win, before the three began chipping golf balls into a bucket in Guerra’s backyard.

“My wife does spray tans…and Hodgey goes, ‘if you can chip it in that bucket, I’ll get a spray tan,'” Guerra told SEN Wednesday.

“I think about the second or third shot I got it in there and all of a sudden Hodgey’s getting a spray tan in my backyard…and I’ve done a double layer on him so he’s walked out of my house on Sunday looking pretty dark.

“But he wasn’t the only one, Birch also put up his hand and got a spray tan as well.”

Guerra also revealed that he was the man responsible for starting the tradition of singing Daryl Braithwaite’s “The Horses,” after a big win.

The tradition started when the Hawks recorded a big win over West Coast in round 2, 2013, a week after they had lost to Geelong yet again.

“We went inside and sung the theme song and then I thought why not play Daryl Braithwaite The Horses, and I put it on and started singing it and all of a sudden all of the boys were involved and everyone was singing it in the showers and the change rooms,” Guerra said.

“From that moment on, after every victory we had that year, we sung The Horses.”