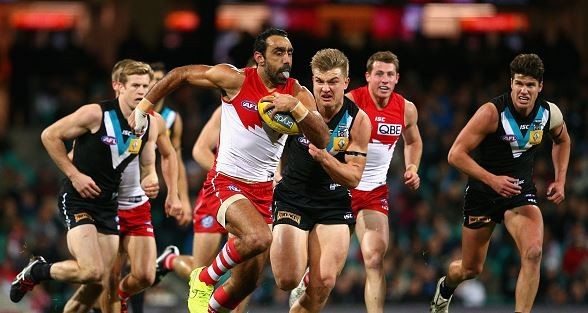 Adam Goodes says it was “a very humbling experience” to see all of the tributes he received during round 18.

The 35-year-old also confirmed that he will play this week against Geelong at Simonds Stadium.

“Our supporters here at the Swans were absolutely amazing on the weekend. It would have been nice to be at the SCG to experience it all. Speaking to a few of the players, they said the atmosphere out there was incredible,” Goodes told SwansTV.

“It was a very humbling experience to see the different things that our football club did, that other football clubs did and other players did to show their support. The support from the AFL industry has been something that is not surprising because in the AFL we do look after our own extremely well.

“I felt very loved over the weekend.

“From all involved at the Sydney Swans, from other clubs and players from all levels of the game, from other codes, from the AFL, from so many in the community, the support has been amazing and it has been felt. It has been a great reminder of why I am one of so many people that just love our game.”

Goodes said he is looking forward to moving on from the booing controversy that has engulfed the AFL over the past week.

“I’m really hoping those discussions are behind us now and we can all move on,” the 365 game veteran said.

“For me, it’s about going out there and playing football and whether this is my last year or not, I really want to be able to go out there and enjoy the last five games of the season and another finals campaign and see what happens.

“That’s my job, that’s what I love doing, that’s the way I really love to express myself and I’m really looking forward to doing that on the weekend.”