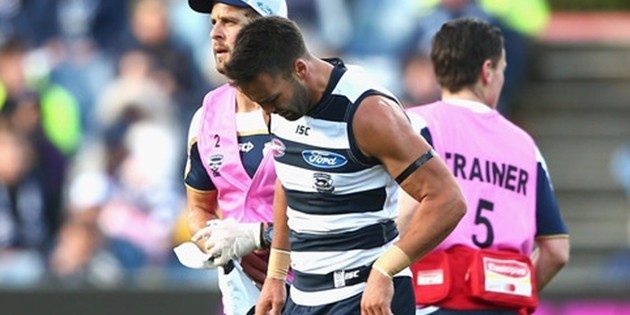 Geelong has suffered several key injuries in the aftermath Sunday’s gutsy win over the Gold Coast Suns at Simonds Stadium.

Jimmy Bartel looks set for a lengthy stay on the sidelines after injuring his knee in the first term.

The extent of his injury will not be fully known until he undergoes scans later this week.

Matthew Stokes also sat out the second half of the game with an ankle injury.

The cats are waiting on scans to reveal the full extent of his injury, however it is believed to be an achilles related problem.

Defender Tom Lonergan was stretched off towards the end of the third quarter after a heavy collision in a marking contest.

Lonergon appeared to be concussed after being kneed in the head by Gold Coast’s Sam Day.

The veteran has been cleared of any serious neck damage.