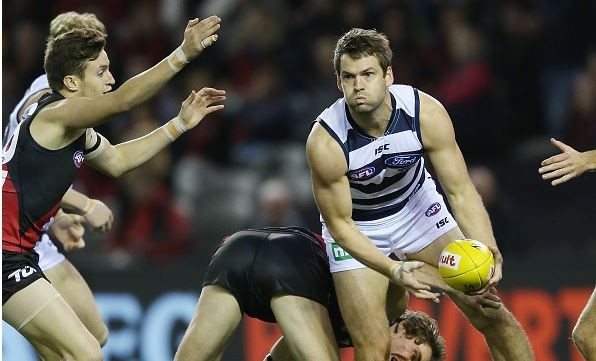 The 30-year-old has played 194 career games for Melbourne and Geelong over 13 seasons.

He moved across to the Cats after 150 games with the Demons, where he won the 2004 NAB Rising Star award, before establishing himself as an important part of Geelong’s backline for the past three years.

He battled several niggling injuries while at Geelong, before his body finally gave in.

“I’ve got mixed emotions, of course,” Rivers told geelongcats.com.au after telling his teammates of his decision on Monday.

“In the end it was a bit of an easy decision, knowing that I physically can’t go on anymore. The knees have finally won and I’ve had to pull up stumps a bit earlier than what I would’ve liked.

“But that’s just what happens sometimes in footy, unfortunately, so I’m a bit sad about not being able to run out on the ‘G again.”

Rivers re-injured his troublesome knee against Hawthorn in round 20, with scans later showing that he had torn his meniscus.

“After I felt it, I knew it was going to be my last game,” Rivers said. “So at half-time I got a bit of help from the doc to get me through the second half.

“It was a bit sore, but you just push through those things knowing that it’s going to be your last game.

“It was a big game against the Hawks in front of 50,000 at the ‘G, so I suppose I can be thankful that my last game was a big one.

“We didn’t get the result we wanted, of course, but running out with the boys one last time is something I’ll always remember.”