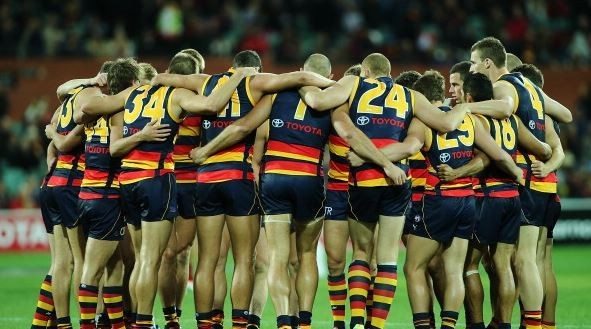 After finishing sixth and bowing out in the semi-finals against Hawthorn, Alex Patterson takes a look at the state of the Crows’ playing list and explains why Adelaide fans should be licking their lips.

It’s been a difficult year for everyone involved with the Adelaide Football Club, possibly the most testing season the club has ever had to endure since its establishment in 1990.

Adelaide has two premierships to its name, winning back-to-back flags in 1997-98 and has taken part in 31 finals, nine better than their cross town rivals, Port Adelaide.

The last time the Crows took centre stage on the last Saturday in September – now the first Saturday in October – was in 1998, the year they won their second flag in a row, defeating North Melbourne by 35 points.

This year will mark 17 years since that famous victory, but after bouncing back into the finals this season after a failed 2014 campaign, the Crows seem to be back on the way up with a list that contains a mixture of both youth and experience, both vitally important to winning premierships.

Led by an electric captain in the form of Taylor Walker, who has lifted his game since taking over the captaincy, the Crows have quite a multi-dimensional forward line.

Walker and Adelaide’s other key forward, Josh Jenkins kicked 105 goals between them this the season, elite numbers for any forward pairing.

Combine that with the best small forward in the competition, Eddie Betts, who led the scoring with 63 goals for the year and Adelaide are quite a difficult team to break down and defend against.

Charlie Cameron, who claimed the Mark Bickley award for best emerging talent, kicked 29 goals and earned a rising star nomination, as the 23 year old had his best year yet.

Four quality players in the forward half would explain exactly why the Crows were ranked third in the competition for points scored, only trailing Hawthorn and West Coast, who are both now playing in preliminary finals this weekend.

A dominant midfield is key to any team’s success and the Crows have a host of players that have quality as well as experience.

Ruckman Sam Jacobs is the third best big man in the competition, while you’re guaranteed to get a wholehearted effort from Sloane, club champion Scott Thompson will give his all and Patrick Dangerfield is a chance for this year’s Brownlow. That’s a midfield capable of competing with the best on any given day in my opinion.

With Dangerfield likely to find his way to Geelong in the off-season, the Crows must respond positively to fill that gap.

It has been proven before that certain clubs can still succeed without their star player. Gary Ablett left Geelong at the end of 2010 and the Cats went on to win the flag the following year. The same happened last year with Hawthorn when Buddy Franklin left. The Hawks then went on to claimed back-to-back flags. So alarm bells shouldn’t be ringing over in the Adelaide camp, but they do need to act decisively in order to ensure future success.

Turning to the defence, the Crows have talent in the form of Brodie Smith, who has turned into the one the league’s premium rebounding defenders, key defender Daniel Talia and versatile swingman Rory Laird are also immensely talented.

This isn’t necessarily proven talent, but these players are shaping up as key defenders for the Crows in the future.

James Brayshaw said on Triple M’s coverage of the Bulldogs and Crow’s elimination final that to be a premiership side, you need to have at least 13 players with more than 150 games experience.

Sloane, Jacobs, Walker and David Mackay all have over a 100 games experience, meaning in the next year or two, Adelaide is going to have a list that’s had finals experience and is capable of contending not just for top four, but for a premiership.

It’s an excellent club to take over as coach at the moment and whether it will be interim coach Scott Camporeale or someone new, they’ll be licking their lips at the players they have at their disposal.