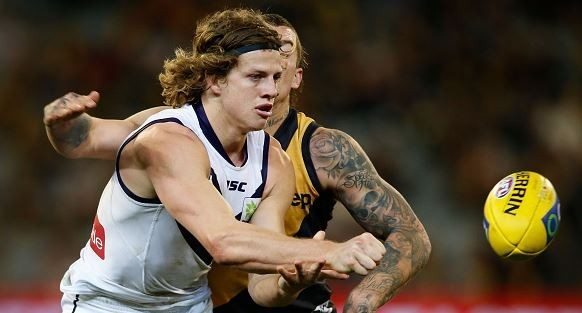 Fyfe has missed the previous two weeks with a groin injury and is expected to play against the Roos on Sunday, with Ross Lyon saying that he could play forward in the absence of Matthew Pavlich.

“To get something you’ve got to give up something,” Lyon said.

“But I think you can have a blend in there.

“That’s what great players do. They move around, they contribute to their team and they go where the team needs them.

“So if the team needs Nathan to go forward, he’ll go forward.”

In other team news, Essendon’s Brendon Goddard has not flown to Queensland for the Bombers’ clash with Gold Coast, due to an ankle injury.

Goddard picked up the injury last week, but has been unable to shake the complaint, with youngster Kyle Langford making the trip with his teammates.