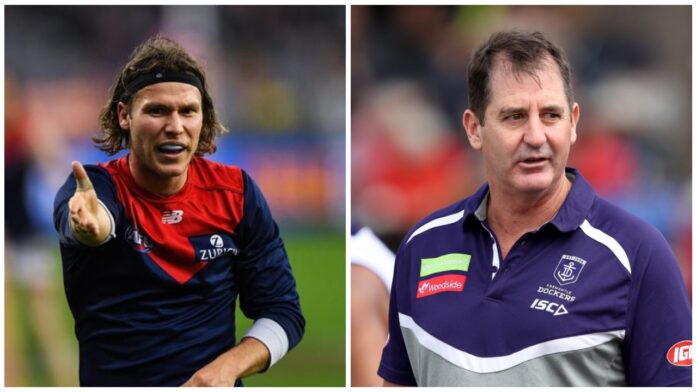 Former Fremantle winger Ed Langdon has said that he has enjoyed working under Simon Goodwin at Melbourne after spending five years under Ross Lyon at the Dockers.

Lyon is red hot favourite for the now vacant Carlton job and while there have been many endorsements from those that have worked with Lyon, Langdon's comments will definitely filter through to new president Luke Sayers.

Langdon compared Lyon and Goodwin and noted that Goodwin's ability to stay calm under pressure and his manner of talking to players made the environment at Melbourne easier to work in.

"To have someone as cool calm and collected as Simon Goodwin. I haven't heard him raise his voice once when he's been at the club."

Langdon said that Lyon could get wound up by the smallest of things and that it perhaps he was too quick to crack the whip.

"Coming from Freo where you don't look Ross in the eye in a meeting and he starts yelling at you, it's a nice change," said Langdon.

Langdon isn't the only former Docker to speak on Lyon's coaching in recent days with gun midfielder Andy Brayshaw speaking about his time under the former St Kilda and Fremantle coach.

Speaking to ABC Sport, Brayshaw said he could see the appeal in why the Blues see Lyon as the man to turn things around.

"Ross was a great coach when he was at Freo. I loved him," said Brayshaw.

"Adam Cerra loved him so I'm sure they would get along. In my 1st 2 years, the growth I had was mainly put towards Ross.

"I definitely think he'd give it a red-hot crack + could take them to really high places. I think he'd do a great job."

Former St Kilda star Nick Dal Santo was another who claimed to have a different experience under Lyon. Dal Santo said that while Lyon could be intense, it was still a good place to be while Lyon was in charge.

“I’m a little bit surprised Ed Langdon felt that way; that was never my experience, or rarely my experience with Ross," he said on Fox Footy's First Crack.

“I looked him in the eye, and maybe it’s a changing of the eras, where the way Ross spoke to us at St Kilda I know was different to the way he spoke to the guys at Fremantle, knowing a few of those guys personally. We’d share stories ‘no no, he never did that with us’, ‘OK, he has evolved’.

“This is not to defend Ross, but I think there’s a bit of a perception that he’s heavy-handed; he’s not that. What he did for us a group, he changed us. I’ve got no issue with (Langdon saying) that.

Lyon since confirmed that he had heard from Langdon who reached out to assure his former coach that the comments were not meant in a disrespectful manner.

Speaking on Triple M, Lyon said that he had heard from his former player and that all had been cleared up.

“A text came through from Ed, ‘Hey Ross, not sure if you saw any of the comments I made after the game, they were taken completely out of context and poorly worded on my behalf ... you know I’ve got nothing but respect for you and the family, hope you’re well’," Lyon revealed.

“If it’s legitimate and that’s what he meant and it was all seriousness, well I’m on a journey of growth and a growth mindset, I would take the feedback.

“In context of that ... when you’re having meetings, it might be a quarter time huddle, you’ve got 22 grown men and you’re conducting a meeting and you’re probably boring them but you might think it’s really important and their eyes drift off ... I make no apologies for that - when you’re up and you’re trying to hold someone to account, how about you’re looking at me.”

“I know Ed, he’s really dry. I’m not here to defend myself and Ed can speak for himself but that’s the context I take it in, he’s very dry and he was one of my favourites.”