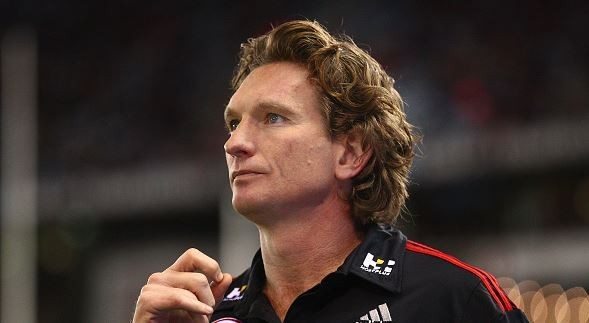 Essendon coach James Hird has officially resigned as head coach of the Bombers, with assistant coach Matthew Egan to take over as interim coach for the remaining three weeks.

The players entered the room first, positioning themselves on either side of the table set up in the middle of the room for CEO Xavier Campbell, club chairman Paul Little and James Hird to speak from.

“It was the board’s opinion that the football club would never be free of the ASADA scandals while Paul and I were here,” Hird said.

“On Monday night I agreed to tender my resignation to the Essendon Football Club.”

Hird then held back tears as he thanked those who had supported him throughout the difficult time he endured at the club.

“To the individuals who have believed in me, fought for the truth and justice, I thank you,” he said.

“I’ll never forget the people that stood up when most disappeared. You (the fans) are special people.

“To my family and friends… I’m truly sorry for what you’ve had to endure.

“In making this decision I hope we all get a chance to move on.

“My final message to players was adversity is a friend who defines who we are. We can fight it or succumb.”

CEO Paul Little then thanked Hird for everything he has done for the club and announced that assistant coach Matthew Egan would take over as interim coach.

“James is one of the most resilient men I have ever met. He will forever be remembered as a legend of our club,” Little said.

“As such James tendered his resignation and the board unanimously decided to accept that resignation.

“The man who combined immense talent with fierce competitiveness; loyalty; endurance and a sense of fair play.

“A player and a captain who was admired by all; loved by Bomber fans; James Hird’s place in the history of our club should never be questioned.

“In relation to his departure, the Board and James have agreed on a negotiated settlement. Terms of this shall remain confidential.

“I wish to thank James for being a loyal and dedicated servant to Essendon.

“In the meantime, Matthew Egan will coach the team for the remainder of the season in a caretaker capacity.”

Little confirmed that he too will stand down as CEO once he has guided the club through the WADA appeal situation.

Hird said that one day he will share his story will the public “but today is not that day.”

“I will tell the story of the last few years when it doesn’t impact on the Essendon footy club.”