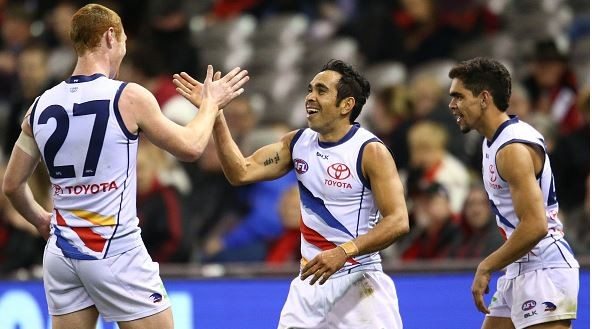 An Essendon fan who made a wager with Crows’ forward Eddie Betts during Adelaide’s win over the Bombers on Saturday has stayed true to his word and paid up to the mercurial forward.

Bomber fan Paul Dunn bet Eddie Betts that he couldn’t kick a tight goal from the boundary on Saturday, offering him a slab of Jim Beam if he did.

“There was another Essendon supporter right behind Eddie, who was giving some pretty good stick to try and put him off,” Paul said of the moment.

“Just as Eddie was running in to kick I pretty much said, ‘We’ll put a slab of (Jim) Beam cans on it’. I thought it might tweak him a little bit, but instead he’s kicked a great goal.

“He turned around and celebrated and I gave him a nod to acknowledge the kick.”

Dunn, who is involved with Essendon’s VFL affiliate, managed to track down Adelaide defender Daniel Talia through mutual contacts, who in turn got in touch with Eddie.

“Eddie sent me a message last night and we had a chat over text,” Paul said.

Betts said it was great that Dunn wanted to honour the bet, but asked if he could instead make a donation to the Adelaide Crows Children Foundation in place of the original offer, which he has kindly agreed to do.