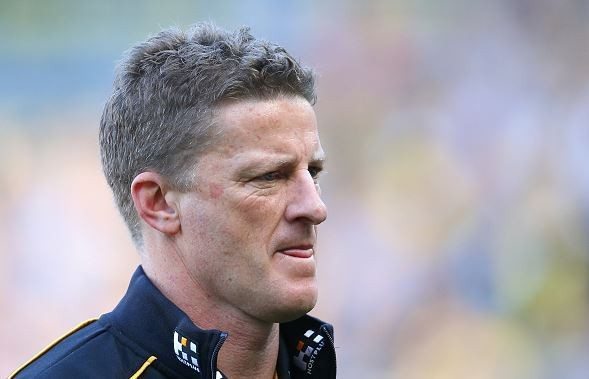 Richmond coach Damien Hardwick snapped in his press conference yesterday, with an expletive remark under his breath, after a journalist’s phone went off.

The Tigers’ coach was already fuming after his side was knocked out of the finals by North Melbourne yesterday, before the ringing phone enraged him further.

When the phone rang, Hardwick glared at the perpetrator and said “seriously?” before muttering under his breath, “f—ing moron,” although it was clearly audible to everyone in the room and on the microphones.

The phone rang at the same time as Hardwick was answering a question about a controversial non-holding the ball decision late in the game.

1/2 Some confusion over Hardwick's presser. He was answering my question when someone else's phone went off. He called him an effing moron.

2/2 I had joked as the phone went off the person should be fined. That was the only talk of fines. Dimma was ropeable but surely no action