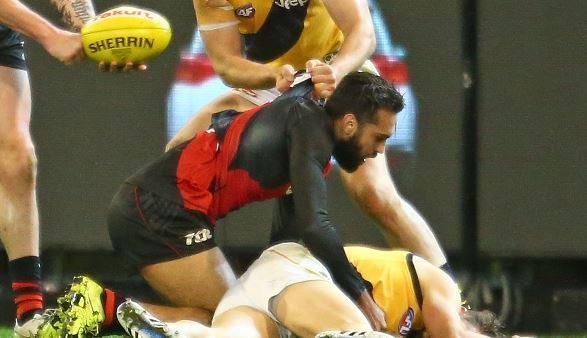 Essendon’s Courtenay Dempsey has been referred directly to the tribunal, after he was charged with rough conduct on Brett Deledio for his dangerous tackle on Saturday night. No early guilty plea is available, with the conduct being graded as careless conduct, severe impact and high contact.

Steve Johnson has been offered a $1000 fine for rough conduct on Nathan Brown.

Tom Bell and Adam Treloar have been fined $1000 each for wrestling each other.

Nine Gold Coast players have been fined $1000 for their part in the half time melee against Port Adelaide: Bennell, Lynch, Schade, Dixon, Cameron, Matera, Lemmens, Garlett and Miller.

Seven Port Adelaide players have been fined $1000 for their part in the melee: Hartlett, O’Shea, Lobbe, Impey, Pittard, Jonas and Gray.

Jack Viney and Nick Suban can accept a $1000 for wrestling each other in yesterday’s clash at Domain Stadium between Fremantle and Melbourne.